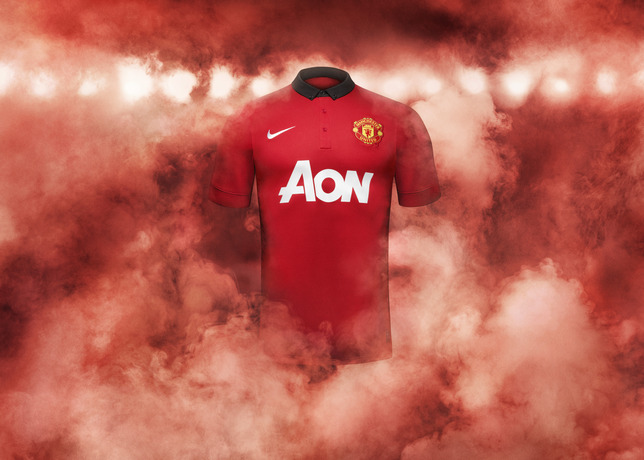 Nike and Manchester United have just pulled the trigger on their new home kit for next season, which is thankfully a load less “tablecloth-y” than last year’s dismal effort – though gingham elements do remain for 2013/14.

You’ll be glad to know that it’s been released with the usual hot blast of design department guff – have a read:

“Next season…United will play in a new home kit inspired by elements of the club’s successful history and the city’s industrial heritage.

“The United home shirt features the return of the black collar, worn upturned with such brilliance by Eric Cantona during the club’s champion run of the 1990s.

“Underneath the collar is a subtle tonal grey-and black-gingham check, first used on last season’s home shirt. The check represents Manchester’s industrial past, referencing the city’s cotton mills of the 18th century, which once produced the classic check fabric.

“The tailored collar, with three buttons at the front and one at the back, represents the city’s sense of style. Two side vents at the hem of the shirt feature the same tonal black-and-grey gingham check that is found under the collar.

Got it? Buttons and gingham = ultra Mancunian.

For what it’s worth we like it, even if it is just slightly edging onto the boring side of smart. To be honest, they could have covered potato sacks in dog vomit and cut armholes in them and we’d still like it more than 2012/13’s abomination.