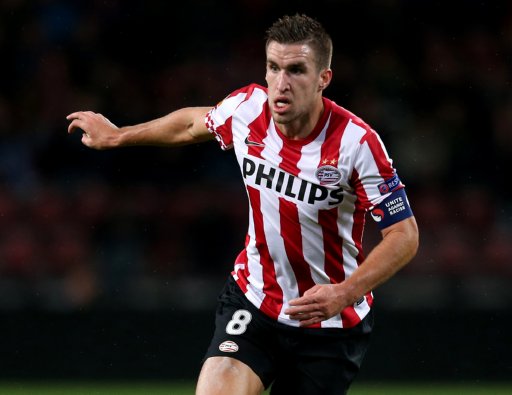 On second thoughts, we’re not sure if it’s wise to let Strootman and Phil Jones play together

Not that he’s particularly keen to talk about it, but it looks like Kevin Strootman may be on Manchester United’s radar again this summer, with the PSV midfielder presenting an altogether cheaper and more attainable alternative to Cesc Fabregas, who is also being mentioned in passing – perhaps more unrealistically.

Reminiscent of Bastian Schweinstieger before him, Strootman, 23 and reportedly available for £17million, is one of those young, inversely mature midfielders who seems to have been knocking around for ages, both due to an assured presence belying his relatively tender years and to that fact that he’s already racked up 18 full international appearances despite still being captain of the Dutch U21 side.

Having gravitated in from the left, Strootman has now settled into his groove as an old-fashioned up-and-down central midfielder. Able to anchor, defend instinctively, press and attack on the break, he’s definitely a player that would be well utilised at Old Trafford given United’s fairly thin central stable. Imagine Tom Cleverley, but slightly better at everything.

To give you a stats-based flavour of his game, last season he amassed six goals and 10 assists in 32 appearances for PSV and also made 140 tackles – more than any other player in the Eredivisie. It’s fair to say he’s a bit of an all-rounder. He’s what we in the business call the “real deal” – a touch of authentiek kwaliteit…