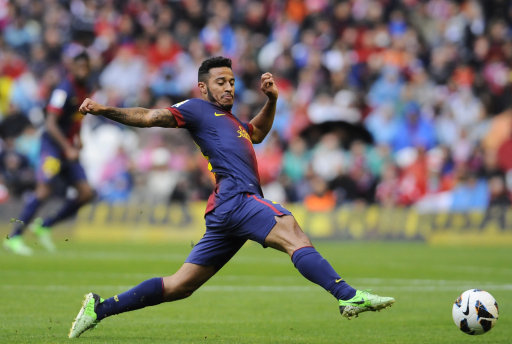 Not since we can remember have Manchester United fans been so excited about a prospective transfer, but the arrival of Thiago Alcantara at Old Trafford just got approximately 100% less “imminent” with Pep Guardiola’s public admission this morning that the 22-year-old Barcelona midfielder is the only player he wants to bring to Bayern Munich this summer.

Pep Guardiola told a press conference, quite literally moments ago:

“I want Thiago Alcantara and I have asked [Bayern to make an approach]. I don’t know what will happen. I know Thiago very well. I talked to Rummenigge and Sammer about him, we will wait and then see.

“I don’t think (adding another midfielder) will be a problem. I spoke to club about my concept and told them why I want Thiago Alcantara.

“Thiago is the only player I want, that’s what I told them. It’ll be him or no one. We have many players but we the need the special (quality) that Thiago Alcantara brings.

“Nobody will leave Barcelona unless they feel they won’t play much. He wants to play. That’s why I proposed him to the club.

“[Bayern] will decide. I told them my opinion.”

Eeep. Suddenly the prospect of seeing Thiago flitting around on the Premier League stage seems an awfully long way off.

Let’s face it, if there’s even a hint of an approach from Pep and Bayern, Thiago’s going to follow his former Barca spirit guide to the Allianz, ain’t he?