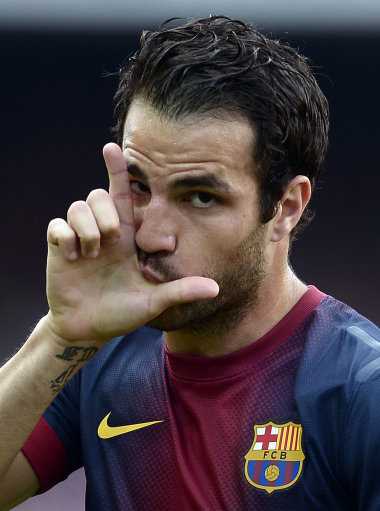 According to Sky Sports and a whole heap of journos over on Twitter (including that insatiable transfer shit-stirrer supreme, Guilherme Ballague) Manchester United have, in the last hour, lodged a €30million (approx £26million) bid for Cesc Fabregas and are currently waiting to hear back from Barcelona.

Indeed, some sources are also claiming the bid to be to the tune of £35million, so it’s fair to say that no-one’s actually got the slightest clue. Standard fare.

This all comes after United lost out in the duel to sign Thiago Alcantara from Barca, who yesterday agreed a deal to join Bayern Munich which will see him following Pep Guardiola from Barcelona to Bavaria.

If these rumours of a big United bid for Cesc are true, then we can’t help but feel it’s all a bit mis-timed and ultimately a bit futile. The time to dabble was a month or so ago, when Fabregas was reported to be considering his options after a sporadic season and with young pretender Thiago waiting in the wings to further usurp him.

United’s chances of dragging him away from the Camp Nou are somewhere close to zilch now, surely?