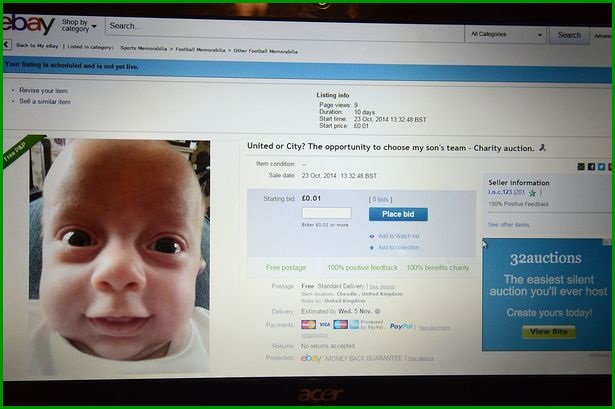 You may recall that last week Pies brought you news of a father who had stuck his newborn son’s future support up on Ebay, allowing either Manchester City or Manchester United fans to bid in order to win the seven-month-old’s club allegiances.

The plan was to have City and United fans tender for seven-month-old Eddie Charters’ support in the name of charity, with father Ian – a transplanted Watford fan living in Cheadle – vowing to buy Eddie a football top and matching curtains in the winning team’s colours, take him to matches and generally do “the best I can to make sure he doesn’t end up supporting the other team”.

However, Ian was inundated with messages from irked Stockport County fans after the listing hit the news, griping that it was only fair their club be added as a third option.

Ian, 30, duly agreed to add The Hatters into the mix on the basis that the Conference North side are actually Eddie’s local team in geographic terms.

Lo and behold, it looks like little Eddie will be spending a lot of time down at Edgeley Park in the not-so-distant future, with a Stockport fan sniping in with a winning bid of £190 just before the auction closed to seal the deal.

“I’ve done some research and it’s only £1 to get in for children under 10 which is good and it’s just down the road.

They have struggled recently but they are a big club for that league and are hopefully on the way back.”

“They’re at home on Saturday so we’re going to go down for his first match and I’ll buy him the kit.”

A man of his word.