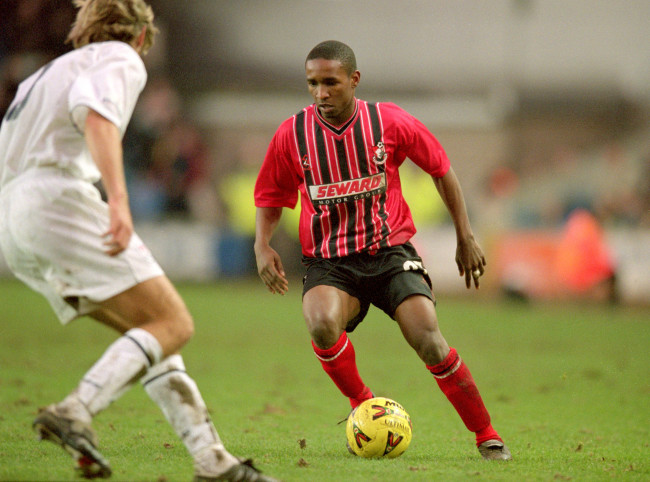 27 Jan 2001: Jermaine Defoe of Bournemouth on the ball during the Nationwide League Division Two match against Millwall at the New Den in London. Bournemouth won 1-0. Mandatory Credit: Chris Lobina /Allsport

Only two games into the season and media minds with opinions-to-deadline are saying Sunderland are as good as relegated. It might be a record. It might also be why Jermain Defoe is looking to leave the club he joined in January on a contract with three years left to run.

Defoe, 32, has scored once for Sunderland, who in turn have shipped seven goals in two Premier League defeats. Last season, the former West Ham and Tottenham striker scored four times as Sunderland defied the odds and stayed up.

Defoe’s record at Bournemouth, where he played on loan from West Ham in 2001, is magnificent. Between October 2000 and May 2001 Defoe equalled a post-war record when scoring ten goals in consecutive games. He finished his spell with 19 goals in 29 appearances for The Cherries.

Chelsea will try to encourage Pedro to pick them over Manchester United, says the Mail. Louis Van Gaal’s reservations over Pedro’s lack of pace and the chance to live in London could be enough to tempt the Spaniard to join Mourinho’s squad.

Sunderland are after Sébastien Haller, the French striker who scored 14 goals in 19 league games on loan at Utrecht before making a permanent move to the Dutch club from Auxerre, says the Times.

Southampton and Celtic are at odds over Virgil van Dijk’s value. Celtic want £12m for the Dutch defender, who is also wanted by Lille. The Saints want to pay much less. The Daily Record says Van Dijk is certain to leave Parkhead. The Mail quotes David Moss, assistant chief scout with the Scottish champions, saying the defender “will probably be sold in the coming weeks”. The Mail says Everton are keen.

Southampton are also eyeing Jannik Vestergaard, of Werder Bremen, after being told that Napoli’s Kalidou Koulibaly is staying in Italy. Norwich will test that by bidding £7m for Koulibaly.

The Times says Watford “have been offered” Yoann Gourcuff, the former Milan midfielder is a free agent after departing Lyons. Presumably, every other Premier League club has been offered the player also, but only Watford are interested.