After the usual eternal ball-jiggling and awkward Euro-banter, the draw for the 2015/16 Champions League Group Stages finally got underway in Monaco this afternoon, with the Premier League’s four entrants on the end of some interesting match-ups. 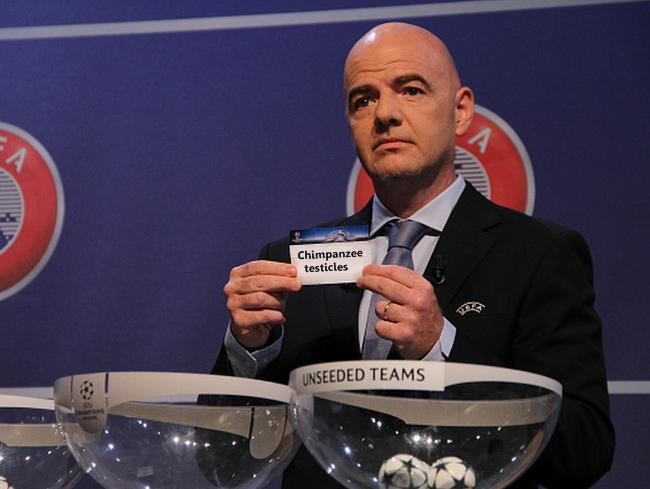 In Group G, Chelsea boss Jose Mourinho faces his old side Porto, with whom he won the Champions League back in 2003/04. Dynamo Kyiv and Maccabi Tel Aviv make up what is a pretty cushy draw for the Blues.

True to form, Arsenal get their usual clash with German juggernauts Bayern Munich, along with Greek giants Olympiakos and Dinamo Zagreb. So overall, not the worst mix of sides for the Gunners

Manchester United received a cushy draw, joining Memphis Depay’s old side PSV, CSKA Moscow and Wolfsbfurg. in Group B. Not surprisingly, co-host Peter Schmeichel struggled to keep his utter joy at the outcome for the Red Devils hidden, although the upwardly mobile Wolfsburg won’t be a pushover.

Elsewhere current holders Barcelona should sail through a Group E containing Bayer Leverkusen, Roma and BATE Borisov. While Group A looks particularly juicy, with Real Madrid going head to head with PSG and the mighty Zlatan set for a return to Malmo.

Here’s the draw in full for your delectation (Groups C and H are a bit rubbish, aren’t they?) 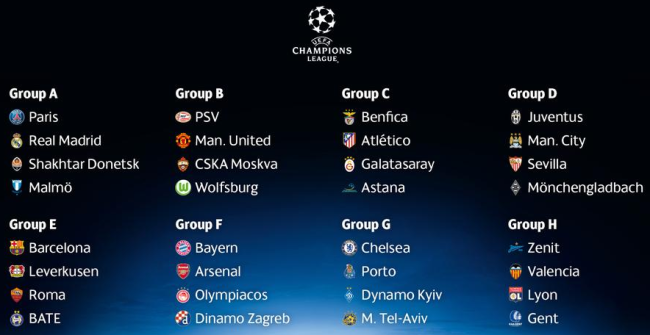