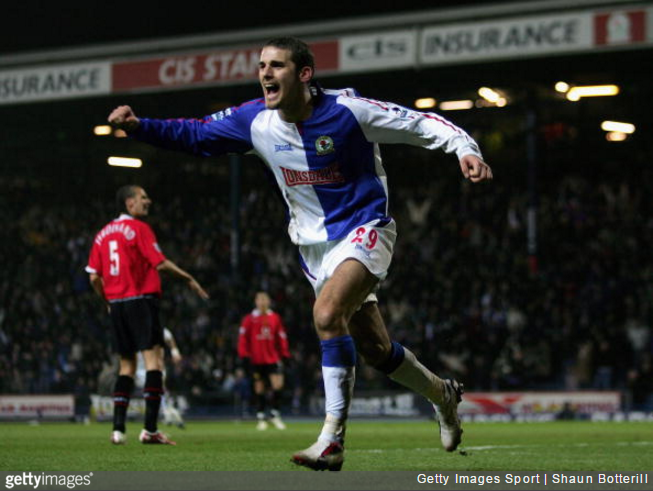 The highs in David Bentley’s career may have ended up being few and far between – and we’re mostly talking about scoring from the halfway line for Tottenham against Arsenal and tipping a barrel of icy water over Harry Redknapp live on television here.

However, after his first match as a full-time Blackburn player it seemed the world should have been his lobster.

Having converting his loan move from Arsenal into a permanent deal with Rovers on the Friday, Bentley quickly proceeded to make quite an impression.

In front of an Ewood Park crowd of 24,484, he nudged Rovers ahead in the 35th minute. Louis Saha then equalised almost immediately for United before Bentley added his second five minutes before the break when Rio Ferdinand botched a header back to Edwin van der Sar. A Lucas Neill penalty then added a third for Rovers in the dying seconds of the first half.

It was ten minutes after the restart that Bentley found himself entering the record books when he completed his hat-trick – the midfielder finding himself unmarked in the United box and scampering onto a Robbie Savage flick before promptly rammed a shot past Van der Sar and into the bottom right corner.

Bentley thus became the first ever player to score three goals against United in the Premier League era. QPR’s David Bailey did it once in 1992, but that doesn’t count because football didn’t really exist at that point. Just ask Sky Sports.

It rarely got that good for Bentley again, apart from the day he drenched ‘Arry, of course.