Manchester United registered their best start to a Premier League campaign since 2011/12 thanks to a hard-fought win at St. Mary’s.

Romelu Lukaku netted the only goal of the game on 20 minutes, the Belgian tapping home his sixth of the new league campaign after Fraser Forster had saved his initial header.

Marcus Rashford then saw a sweetly-struck freekick fly just wide of the upright.

However, for much of the game, it was Saints who looked more like scoring, with Oriol Romelu seeing his goal-bound header cleared off the line by Marouane Fellaini.

Late on, United boss Jose Mourninho was sent to the stands by ref Craig Pawson, apparently for his constant theatrics and encroaching onto the pitch.

This is the encroachment Jose Mourinho was sent off for yesterday. Don’t think @ManUtd impressed. pic.twitter.com/EcEiFsBmCf

Slim margins indeed, but at least Mourinho managed to remain on good (and oddly intimate) terms with the fourth official. 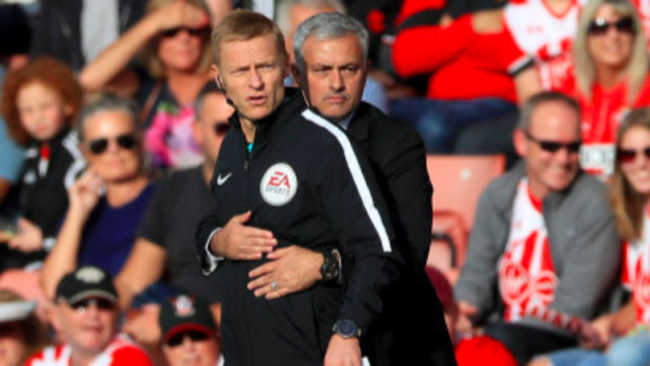 Regardless, the comprehensive win saw United stay level on points with dear neighbours Man City at the top of the Premier League table.

Southampton go 11th after the defeat, although head coach Mauricio Pellegrino is sure to be encouraged by his side’s impressive display.

Sadly, the game was marred by a section of the travelling fans still choosing to defy the player’s own request and continue singing that racist nonsense about Lukaku, with United now investigating the incident.