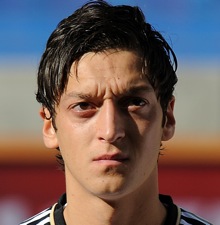 Spanish newspaper El Pais is reporting that Barcelona have agreed a four-year deal with Werder Bremen to sign playmaker Mesut Ozil. The fee? Around €10m.

With no Cesc Fabregas, Barca see Ozil as a decent second choice, even though they are different types of player.

This won’t do anything for the good humour of Man Utd gaffer Alex Ferguson, who – despite what he says – has been tracking the German World Cup star for several weeks. When asked if United were interested in signing Ozil, Fergie replied: “I don’t know.”

In Fergiespeak, that’s as good as a yes.

I think United should be prepared to go as high as £20m for Ozil, even though it seems Werder are happy to accept almost half that, as the player is nearing the end of his contract. Chances are, his value is only going one way after this season: up.

The German would make a fine replacement for the veteran Paul Scholes, no?