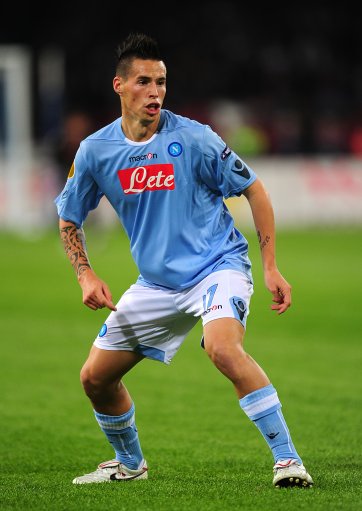 Hamsik’s form has seen him linked with a move away from the Stadio San Paolo for the best part of two season’s now and, when asked by RAI Sport about his myriad of potential suitors, the 23-year-old Slovakian midfielder seemed to flutter his eyelashes in United’s direction:

“It is pleasing to hear that kind of comment, even if I haven’t had any direct contact. I have to admit, it would be difficult to say no to Manchester United.”

With long-term target Wesley Sneijder taken out of the market recently and Bayern Munich unwilling to part with Bastian Schweinsteiger for a penny less than £35 million, does Hamsik represent the next best bet for United in their bid to overhaul their waning midfield?

Personally, I think I’d go all out for Lyon’s Yoann Gourcuff, who categorically isn’t allergic to grass – despite what certain sleep-deprived, mildly hung-over football writers may have you believe!