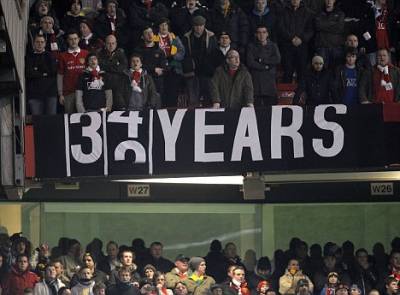 Former Man Utd medal harvester David May is planning a party in the city centre on the eve of the upcoming Manchester derby (this Saturday), which he has described as a ‘celebration’ of Man City’s 35th year without a trophy.

The party is open to the public and will cost £20 (with all proceeds going to charity) to attend as part of the ‘United Nights’ program, which brings fans and former players together ahead of derby games.

From the Manchester Evening News:

“The M.E.N. understands the Stretford End ‘ticker’ banner, which celebrates City’s barren spell, will be ‘turned’ from 34 to 35 during the party.”

Advertising the event on his personal blog, May himself wrote:

“The next United Night has landed perfectly, it is before the biggest game of the season, A TITLE DECIDER WITH CITY AT OLD TRAFFORD IN FEB. Hundreds of Reds getting together for a night they will never forget.

Apparently the final sentence and a picture of the Stretford End ‘ticker’ banner were taken down shortly after they were posted, with May adding that the event was just part of the traditional ‘banter’ (oh, how I’ve come to loathe that word) between the two sets of fans and was not meant to offend.

When quizzed about the celebration, City ‘keeper Joe Hart kept is short, sweet and simple:

“Fair play, it’s not false because we haven’t won anything for 35 years, but I assume they are doing it because there won’t be many more of them.”

UPDATE: May has now shelved his party plans after Manchester police and several city-centre bars told him to stop being such an antagonising little oik.