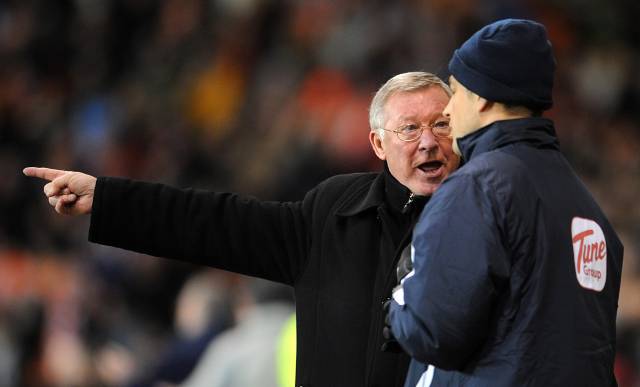 Sir Alex Ferguson is staring down the barrel of an automatic two-match ban after the FA requested a copy of his post-Chelsea interview with MUTV in which the Manchester United manager openly criticised referee Martin Atkinson.

After just about keeping the barracking in check on Sky Sports directly after the game, Ferguson later questioned the referee’s integrity – implying to United’s in-house station that he feared Atkinson wasn’t ‘fair or strong enough’ to take charge of the game and that he ‘feared the worst’ when he learned Atkinson was due to officiate at Stamford Bridge.

MUTV are under no obligation to hand over a copy of the tape to the FA, though the disciplinary committee have stated that it would be in United’s interest to allow Ferguson to bring his comments into some sort of context – though, by releasing the tapes, United will bring about the prospect of Sir Alex being shopped by his own club.

Whereas I’m firmly in favour of officials being made liable and thus being exposed to the same levels of objective criticism that is levelled at players and managers week-on-week, for Ferguson (or anyone else for that matter) to bring a poor decision into question is one thing, but to accuse a referee of not being ‘fair’ is an entirely different, impartiality-undermining basket of apples and it just ain’t cool…man.

With that quandary in mind, the FA have until 4pm on Friday to either hit Ferguson with an ‘improper conduct’ charge or forever hold their peace.