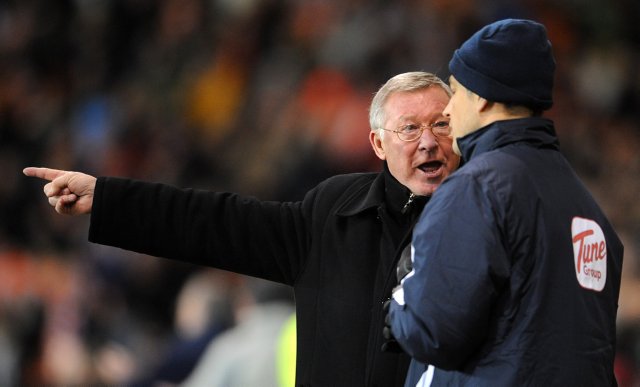 “I’m not talking to you anymore sunshine!”

The FA have come down hard on Sir Alex Ferguson and hit the Manchester United manager with a five, count ’em, five-match touchline ban (the longest in Premier League history) over comments he made about referee Mark Atkinson last month.

The FA released the following statement earlier this evening:

“At an independent regulatory commission today (Wednesday), Sir Alex Ferguson was handed a touchline suspension for three matches and fined a total of £30,000.

“The commission found the charge of improper conduct relating to media comments proven, following remarks made in relation to match official Martin Atkinson in post-match interviews after Manchester United’s fixture with Chelsea at Stamford Bridge on Tuesday March 1, 2011.

“Furthermore the commission invoked a two-match suspended touchline ban, relating to a previous charge of improper conduct in relation to media comments made in October 2009.

The official paperwork will arrive at Old Trafford tomorrow, with Ferguson allowed a further 48 hours to appeal the decision – meaning any sanction will come into effect until after Saturday’s Premier League encounter with Bolton.

Should an appeal be waived or the five-match ban be upheld, Fergie will spend the entire month of April watching United’s games from the stands, including their FA Cup semi-final with Man City.

In further ‘ref criticism and subsequent ban’ news, West Ham manager Avram Grant has also been charged with improper conduct by the FA after using abstract Samurai references to denounce referee Mike Jones’ performance after his side’s 2-1 FA Cup defeat to Stoke at the weekend.