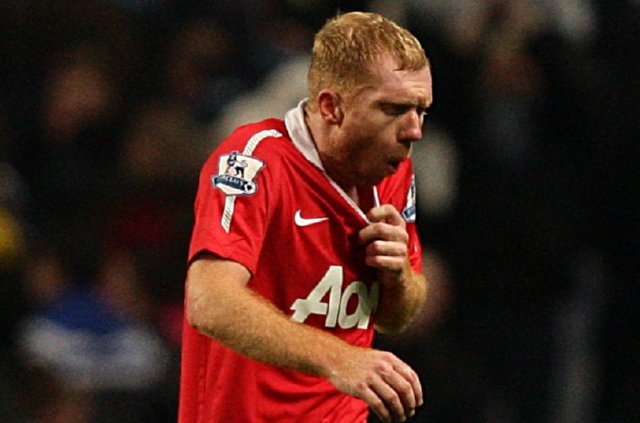 Until this morning, Paul Scholes hadn’t said a word in public for nigh-on 15 years, but the Manchester United midfielder has broken ranks ahead of the FA Cup semi-final between the two sides to let Manchester City know that he and his club don’t consider them as their ‘main rivals’ – especially while they continue to wallow all the way down there in fourth spot.

Speaking to the PA, Scholes insisted that, such is the discrepancy between the two clubs’ league positions, it is only the geographical proximity between United and City that continues to keep any kind of rivalry alive:

“When they’re fourth or fifth, I don’t think they can be classed as a main rival. Our main rivals are obviously Arsenal and Chelsea. I think City are just a rival because of where they are (geographically) – Liverpool are the same.”

“With them getting the money, it has probably helped us and spurred us on a bit more when we have played them.

“There has been nothing to choose between us in the last five or six games. They will obviously be p***** off that they have only managed to beat us once [under Sheikh Mansour’s ownership] and that game was a Carling Cup semi-final first leg, with us having another game to make up for it.

“We have nicked the games with goals in the last minutes. I’ve done it, Michael Owen’s done it and Wayne Rooney did it last season. That’s maybe the difference between the two teams.

“We have a belief that we can beat anybody, but if City have that, I’m not too sure. But their spending is not our problem is it?”

Scholes admitted that, while he is looking forward to the prospect of a Manchester derby at Wembley, he and United are more than wary of the bragging rights at stake:

“It is painful [losing to City]. I remember going to Maine Road and losing 3-1 and it’s horrible. You hate losing against anybody, but City? But it just makes you more determined.

“I have family who are Blues and there are Reds everywhere too, so the desire to win is massive. It’s an FA Cup semi-final at Wembley. It’s massive.

“It’s the biggest game we’ve had against City for a while. Whoever loses will be devastated.”

Unusually candid stuff from a wily veteran who usually declines to comment – whatever the question.