Firstly, a brief disclaimer. I am not a Manchester United fan, nor am I a Manchester City fan. I have no ties, affinity or preference for either Manchester club and the following article is written from a staunchly neutral, human perspective – and when ‘supporters’ are mentioned I am, of course, referring solely to the audible minority. 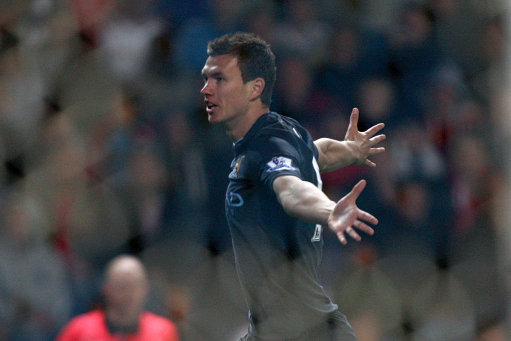 During last night’s Premier League tie between Manchester City and Blackburn Rovers a fine twist on one of football’s time-honoured cross-city jibes reared it’s ugly head when hordes of City fans began chanting about the Munich air disaster once again.

One more time with feeling boys, from the top! “Who put the ball in the Munichs’ net?”

Granted, it’s not a direct reference to the event itself – more an abstract name-drop – but, non-the-less, referring to United as ‘The Munichs’ in any capacity is still a venomous barb weighted with hatred…tiny-minded, almost-entirely-ignorant hatred.

Not to say that the riling of any given club’s dead is the sole preserve of the City fans alone (United supporters themselves have long chanted about Hillsborough/Heysel, etc… and similar chants plague clubs and rivalries the world over), but it’s fair to say that the boys – in fact, who am I trying to kid? the grown men – in blue have had themselves some good mileage out of the tragic events of  6th Feb, 1958. 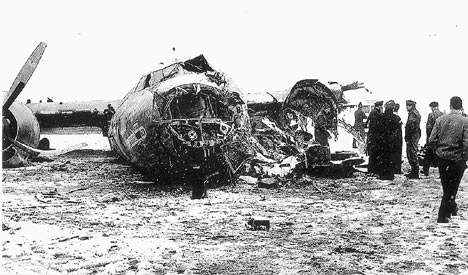 After first cottoning-on to what the City fans were chanting at the far end of Ewood Park, I initially considered that perhaps the numb lack of compassion and humility could be put down to the fact that the tragedy no-longer seems relevant to the younger generation of cerebrally-stymied moron – that the pain and grief, as with most major disasters, has somehow become secular, irreverent and profane with the passage of time.

Then, almost immediately, came the flooding wash of realisation that there really can be no excuse – human tragedy should never be used as leverage to brashly brag, to wind-up, to merely bait opposing fans at a f*cking football match. People died.

One day prior to City’s game against Blackburn, the BBC screened their intensely moving dramatisation of the Munich disaster, called simply and fittingly ‘United’.

Sat in silent reverie for the duration, I’m not ashamed to admit that I shed a few tears while watching the programme when it aired on Sunday night, not because it was anything to do with a club that I feel any affinity towards, but because it was one more in the never-ending cavalcade of reminders that football is – and will always only ever be – little more than a game and, in turn, that it is the people, the characters on the stage, that have plied the sport with it’s massive, groaning emotional legacy.

Sitting through ‘United’ didn’t swell my pride in the stricken club’s oft-vaunted refusal to go under after being decimated and razed to the ground by catastrophe, nor did it heighten my respect for Jimmy Murphy and his indefatigable faith – it simply coerced me into the re-realisation that the shadows of such footballing tragedies are never entirely banished and, latterly, just how ridiculously empty my initial conclusion re: the reasoning behind City fans chants at Ewood the following day was.

As I don’t overly care for either club involved, the fact that I was riled by this most recent batch of Munich chants (when it usually wouldn’t register beyond an irked tut) can only be attributed to the fact that my dander was up after softly weeping through ‘United’ the day before – but that it exactly the point.

As football fans, we are seldom, if ever, offered the opportunity to forget about our beloved sport’s beloved dead and the sanctity with which they deserve to be treated. 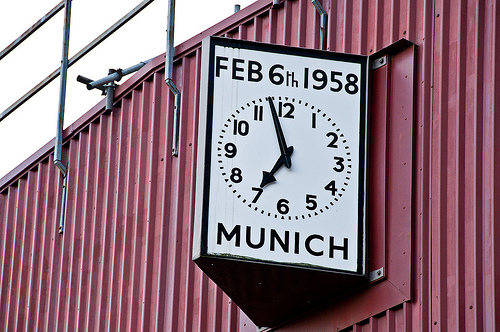 With minute’s silences hither and tributes scattered thither, the simple train of though that such tragedies are gradually fading from modern memory cannot be the case – though maybe, with the heaving expansion of the clubs involved and of football in general, it’s perhaps inevitable that personal ties to the heartache are now being lost or phased out –  especially given that seldom few young or ‘new’ supporters seem to possess the wont or wherewithal to be sat down and truly educated on the intense effect that such greivances had on communities at large.

Munich ’58 was a Mancunian tragedy, both sides witnessed needless deaths that served to tear the heart out of city, witnessed by it’s population at first hand – regardless of the entirely superfluous notion of their footballing divide.

Sad as it may seem, I sincerely hope that these slobbering trogs chant with such gleeful abandon because they simply don’t realise what emotional forces they’re toying with, sending the most offensive things their limp synapses can possibly fathom caterwauling around the terraces to try and get a rise –  as the only other feasible explanation to my mind is that the simple notion of inter-human empathy must be slowly corroding away from the inside out.