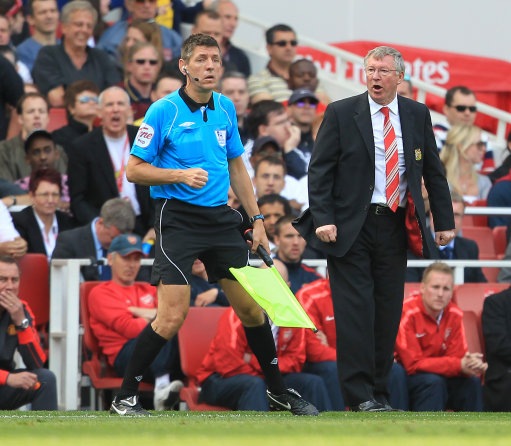 Given that Manchester United manager Sir Alex Ferguson had only recently returned from a five-match touchline ban for questioning the integrity of a referee, it perhaps wasn’t overly savvy to heap all the blame for his side’s 1-0 defeat to Arsenal at the weekend on ref Chris Foy for his decision to snub United’s late penalty claim – yep, the very same Chris Foy that let Nemanja Vidic’s brazen, full-stretch handball slide earlier in the game.

Said Ferguson, after the game:

“It was a clear penalty. He was definitely brought down, but we’re not going to get the decisions in these big games I’m afraid.

“Obviously it gives Chelsea a major chance now and that’s what happens. They got great decisions (against Tottenham on Saturday) but we never seem to get these kind of decisions.”

Anyway, the Guardian reckon that the comments were specifically designed to put pressure on the referee ahead of United’s potentially title-busting clash with Chelsea this Sunday and that the FA are ‘looking into’ Ferguson’s little diatribe – though it’s perhaps worth noting that several other papers seem to think that, as Ferguson didn’t directly question Foy’s integrity, the FA are unlikely to take any action.

The sanest word on the day’s frippery belongs to Monsieur Patrice Evra, who summed up the ferrago succinctly:

“The problem was Man United, not the referee. It’s easy to find some excuse.”

I reckon I’m with Paddy on this one. Any thoughts?