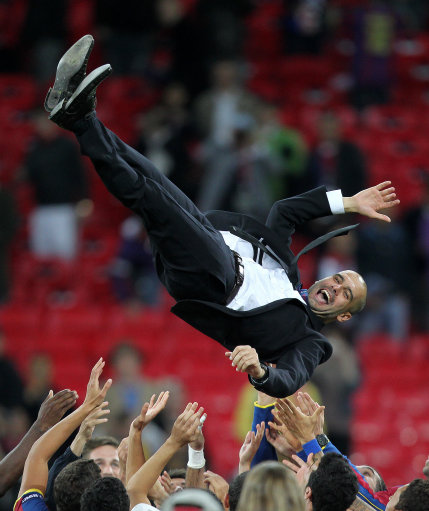 Doubtless that the myriad sycophantic Barca-fluffers of this world will be lighting a content cigarette in bed this morning after waking up swaddled head-to-toe in a halo of fuzzy, post-coital afterglow – Clive Tydlesley, we’re looking at you.

There are a thousand other football writers/analysts better suited to take you through the intricacies of Barca’s tiki-taka, but I feel I should have a stab anyway – last night’s Champions League final was the footballing equivalent of watching a man hold an angry midget at arm’s length for 90 minutes, while systematically kicking the poor little bleeder in the crotch every now and then.

There. Consider that my application for Jonathan Wilson’s post over at the Guardian. 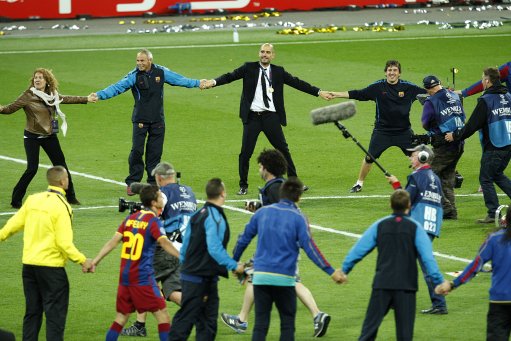 The long and short of it is that Barca were pretty damn special last night, the most seductive element of the their play being their staunch refusal to give United a touch for about 70 minutes.

From the outside looking in, it seemed as if the game was effectively over after approximately 11 minutes – that’s when I felt the ‘shift’.

There was a near-audible ‘click’ as the whole dynamic of the game shifted after United’s valiant early flurry petered out and Barca almost immediately settled into their rhythm and began to exert their clear, ingrained superiority – an ingrained superiority perhaps most visible when the Catalans didn’t so much as flinch after Wayne Rooney whipped home his first-half equaliser. 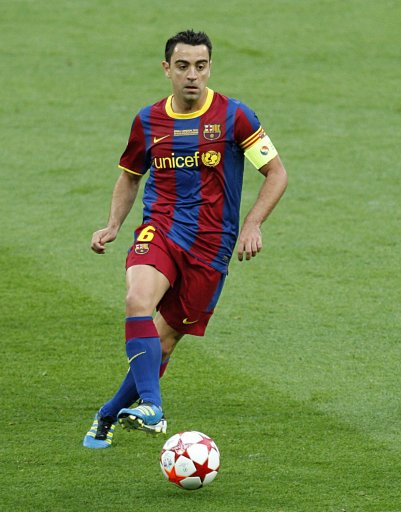 If you’ll forgive my perfect 20-20 hindsight for a moment, I feel that if United were going to even come close to matching Barca so far as goals were concerned, Nani should have probably started in place of Ji-Sung Park as, at the very least, the flighty Portuguese winger may have done something spectacular over the course of the game.

Park may well cover the hard yards on the big stage, but he’s never going to be much of a goal/assist threat and if there’s any side in the world that aren’t going to be phased by an industrious Korean, it’s Barcelona – their style isn’t reliant on particularly quick or strenuous movement, more continuous positional fluidity and a peerless ability to keep the ball moving.

Indeed, the most seductive aspect of Barca’s play was watching them pass themselves into a corner then, with a quick one-two and a minimal shuffle of feet (Iniesta was mesmeric), a channel opened in the gathering ruck and the ball just continued on it’s merry way. 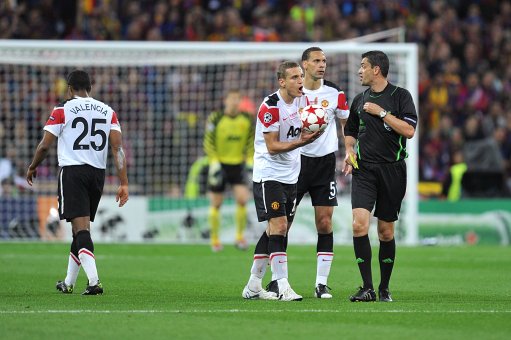 While we’re on the subject, I’d also like to take this chance to commend referee Viktor Kassai on his calm and assured performance.

Had almost any other of UEFA’s pernickety stable of officials been in charge, you get the feeling that Antonio Valencia would have probably seen red before half-time for a series of mis-timed buffets, but the relatively young Kassai’s refreshing reluctance to reach for his cards at the slightest provocation was actually a real joy to behold.

Man of the match? Well, no…but he put in a sterling performance anyway.

So, that’s about all the smoke-blowing you’re going to get from me, it is a Sunday morning after all – how was it for you?