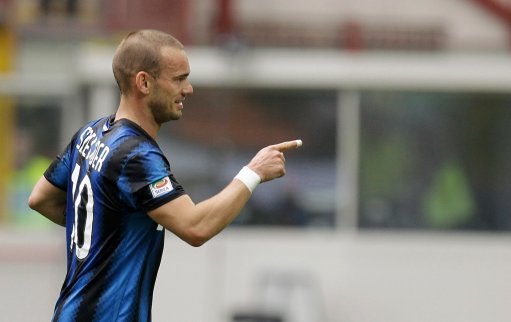 Bang! There, we said it. Sorry Nan.

The Sun are going big this morning with the proclamation that Wesley Sneijder’s £35 million move from Inter Milan to Manchester United will (‘will’, not ‘could’) be completed by the end of the week – maybe even as early as by end of play on Wednesday.

Pies’ gossip hound source whispered in our ears yesterday that United had entered low-level talks with Sneijder’s representatives over a move on Monday afternoon but that the meeting was ‘nothing to crow about’, though the Sun reckon the Dutchman is now all but ready to sign a ‘bumper contract that would eclipse even Wayne Rooney’s £220,000 a week’.

They even have word from a fortunately well-placed anonymous source, one of Sneijder’s Inter teammates no less:

“Everyone expects Wesley’s move to United to be announced soon, maybe as early as Wednesday.

“[Wesley] has even spoken to Dutch international team-mate Nigel de Jong to find out where are the best places to live in Manchester. It all looks imminent, no matter what Inter or Wesley may say in public.

“It seems Inter want to sell but don’t want to admit it, while Wesley wants to go but doesn’t want to say it. It’s a good move for him and good business for Inter.”

Yes, the fee seems a little hefty for a 27-year old who, regardless of his obvious talents, will have relatively little resale value in a few years’ time yadda yadda yadda – but United are pining for a bit of creativity in the middle and the Premier League product could definitely use a ‘Hollywood’ name or two at the moment, Sneijder ticks both of those boxes.