After initially turning up without any kit, Paul Scholes was eventually persuaded by the crowd to borrow boots and shinpads from his 12-year-old son Aaron and turn out for Stalybridge Celtic U12’s annual ‘Dads vs Coaches’ fund-raiser last Sunday afternoon.

Young Aaron has been playing for the Stalybridge juniors since he was five – which, coincidentally, is also his old man’s shoe size by the sound of things.

According to the MEN, Scholes played the first half for the coaches, who racked up a 9-3 by half time, before switching to the dads’ team – eventually losing 12-9 despite scoring a second-half hat-trick.

Said the man himself: “I’ve wanted to play in it for a few years. It was great to have a bit of fun with the coaches. It was a nice day out.”

The Ginger ringer then hovered around after the game, signing children’s shoes and handing out free tickets to his testimonial game at Old Trafford tomorrow evening. 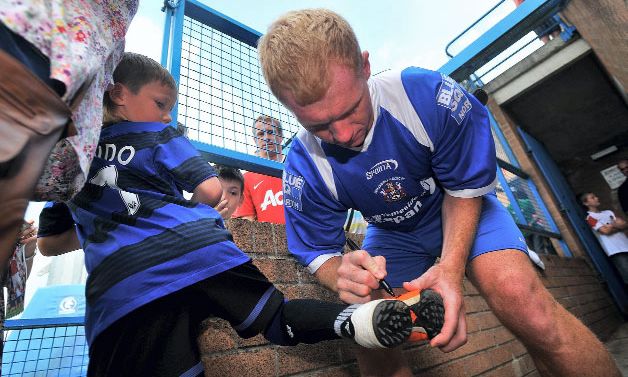