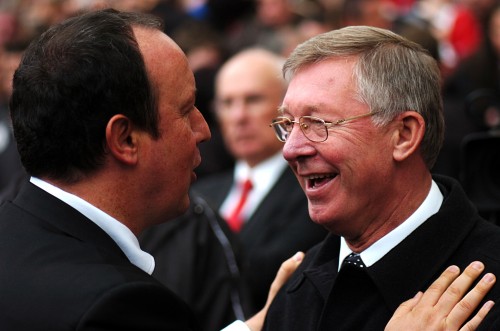 Accoding to the Daily Express, during a recent interview in the offices of an Italian newspaper, Fergie noticed a photo of Benitez on the wall. Pointing to it, he is reported to have said: “He is jobless and he is not a friend of mine”.

The veteran United man then went on to wax lyrical on the subject of Jose Mourinho, another former foe of Benitez.

“Jose is a good friend of mine, ” explained Fergie. “He doesn’t hide his emotions. I like that in human beings. The good thing about Jose is he can laugh at himself.”

“After a game we have a glass of wine, we talk about a million things. He is a good man but is young, maybe in four or five years’ time he will be more calm.”

Is Ferguson preparing the groundwork for the arrival of “the Special One” at Old Trafford in a few years, or is he simply trying to get at Benitez just for the sheer fun of it?