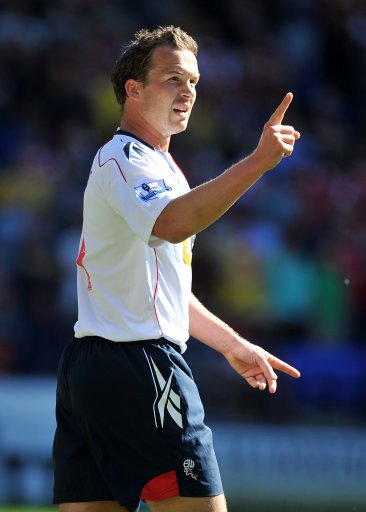 What a fine, upstanding young man Kevin Davies is. Following the injury to Manchester United’s Tom Cleverley on Saturday, in which the Bolton man was “involved”, Davies made sure he cleared the air with the young United starlet.

He also made sure we know he cleared the air, saying: “It was a respectful thing to do for a fellow professional.” Presumably he was talking here about contacting Cleverley after the game and not subjecting him to a terrible tackle.

“Someone contacted me and told me he had a suspected fracture,” Davies explained to the Beeb. “So just out of courtesy, I sent him a long text saying I’ve not seen (a video of) the tackle and hoping it was nothing too serious.”

“He rang me back within minutes and said ‘don’t worry about it, ” continued the burly striker. ” ‘I’ve seen it back, it was just an unfortunate coming together’ and I had a good chat with him. I wished him luck and for me it’s finished.”

Good on Cleverley for forgiving and forgetting, but the fact remains, Davies is no angel and his challenge on the young Red Devil was dangerous.  Surely the respectful thing to do to a fellow professional would be to not break his foot with a needless challenge in the first place?