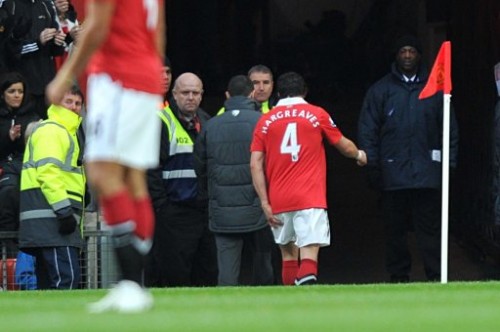 Following his Lazarus-like comeback and goal for Manchester City during the week, Owen Hargreaves’ rediscoverd strength in his legs seems to have worked its way up to his mouth.

The Canadian-born England man now claims that, during his injury-plagued time at United, he was given treatments which may well have done him more harm than good.

“I received some injections and my tendon was never the same,” he explained. “I tried to get back on my feet and (United’s medical staff) said my tendon was good, but it felt like I was made of glass.”

“(The injections) obviously had a huge impact. With hindsight, I probably should not have had them. It’s difficult.”

The former Bayern Munich midfielder also claims that he was put under pressure to play for United last season in a Premier League game against Wolves, but then limped off after just five minutes of action.

“I said, ‘I think I’ve got a bit of a muscle problem here,” he explained. “I was surprised it didn’t go in the warm-up. I wasn’t going to sprint, which sounds comical. I was just going to try to get through 45 minutes because that would have been a start.”

“But I didn’t even last five. I wasn’t surprised because I had said to them that I had a hamstring problem, which I obviously did have.”

PS: Fergie hasn’t been using Arsene Wenger’s “Yellow Liquid” on his own players too, has he??

UPDATE: Ferguson has responded to Hargreaves’ comments by supporting his medical staff.

He said: “As far as I am concerned my medical staff are one of the main reasons why we have been so successful over the last few years.”

“Do you think we would be successful if they were not 100% brilliant? That is my opinion and that is more important than what anyone else has to say about it.”

So that’s Hargreaves told then.