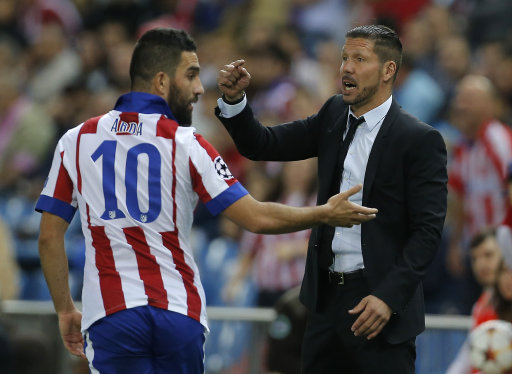 Turkish captain Arda Turan is claiming that his FIFA Coach of the Year vote was changed from Diego Simeone to Germany’s Joachim Löw without his say-so.

The official poll showed that Turan awarded five points to Löw, three to Jose Mourinho and just one to Simeone – his coach at Atletico Madrid.

However, Turan took to Twitter and posted the following series of messages after Löw won the award at last night’s FIFA gala in Switzerland, attesting that his vote had been altered without his consent.

“Regarding the Ballon d’Or and the Coach of the Year award, I’ve had many questions and want to address them again,” he Tweeted.

“On the day where I was asked for my selections, I elected Diego Simeone as the best coach and Cristiano Ronaldo as the best player, it was exactly so.”

“I would like all the press and everyone throughout the world to know. I have explained it again, so as not to confuse anyone.”

Hmmm. Could be something; could be nothing. Whereas vote rigging would come as zero shock, there’s a small chance an honest mistake was made at FA administrative level.

Indeed, a similar issue cropped up after last year’s awards when Goran Pandev alleged his Coach of the Year vote (which was originally for Mourinho) had been altered to Vicente Del Bosque behind his back.

The Macedonian FA later apologised after admitting they filled in the striker’s form incorrectly due to a “technical error“.

For all the money and resources flying about these days, football is still absolutely chock full of these little “technical errors”.