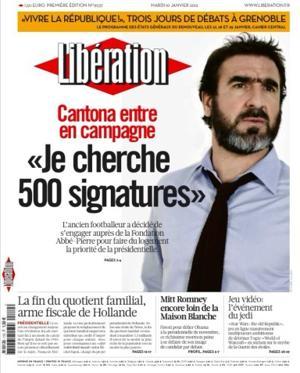 He’s already tried (and sadly failed) to bring about the demise of Western Capitalism by imploring people to protest the global financial crisis and boycott the banking sector by keeping all their money in biscuit tins under the bed, but now Eric Cantona has his hirsute, charismatically dishevelled sights set on total political reform in his native land – announcing his decision to officially run for the French Presidency.

In an open letter, published in Liberation, Cantona outlined his manifesto:

“I am an attentive citizen of our era, of the opportunities it offers to young people—(which are) too limited—of the injustices it generates—too many, too violent, too systematic.

“I am a committed citizen. This engagement obliges me to speak up, more seriously than usual, but also with a keen sense of my responsibility, at a time when our country is faced with difficult choices.”

Cantona is hoping to run in this year’s presidential election and needs the support and signatures of 500 local mayors by the end of February to compete in a first round ballot in late April – with the two biggest vote-winners going through into a second round of voting in early May. Come on Mayors of France, you know what you have to do.

That said, this is Eric Cantona we’re talking about here. Nothing makes sense in the King’s realm.

UPDATE: Forget all of that. It was a PR stunt on Cantona’s part to draw attention to the housing crisis in France. The big, hairy, monobrowed, conscientious, socially aware, Gallic bastard.