Chelsea’s pre-season tour of Malaysia, Thailand and Hong Kong will see them clocking up a grand total of 19,091 miles before the 2011/12 Premier League season kicks off in August- the most distance covered by any of the top flight clubs.

By way of contrast, new boyos Swansea will rack up just 19 miles in that same time, playing away friendlies against fellow Welshies Port Talbot and Neath. 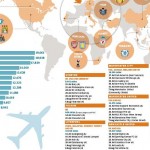