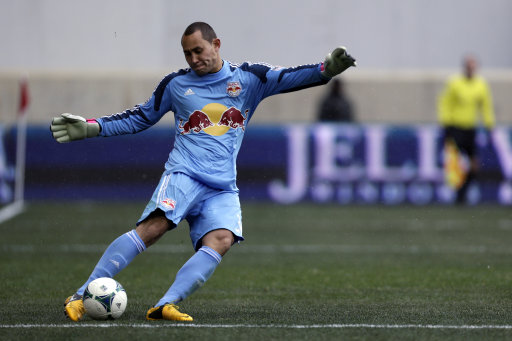 New York Red Bulls have said that they are willing to pay their fans if it will stop them chanting obscenities at their players.

For reasons far beyond our capacity to comprehend, it’s apparently become a bit of a tradition for the Red Bulls fans to chant “you suck a**hole” at the players before each and every goalkick, a chant which has apparently spread to a few other MLS stadiums over the past season.

Understandably, the MLS themselves are keen to eradicate the “YSA” chant (as it has become known) as they are worried that such remorseless profanity may offend families in attendance as well as their all-important and overly conservative TV networks and sponsors.

In searching for a solution to nix the “YSA” chant, New York Red Bulls have come up with a genius scheme to stop their fans from bellowing it in unison before goalkicks – they plan to bribe them.

This from Sports Illustrated:

“[Red Bulls have] notified its three fan groups — the Empire Supporters Club, the Garden State Ultras and the Viking Army — that $500 will be contributed to each for every home game during which “YSA” isn’t heard in Red Bull Arena’s South Ward.

“The money will be doled out in $2,000 increments, meaning the stadium will have to be YSA free for four games before the supporters are rewarded.”

The supporters groups will then be free to use the donations for anything they see fit, “from buying batteries for the megaphone to offsetting costs for bus trips,” as the Empire Supporters Club informed their members via a message on their website.

Can you imagine clubs trying to implement this kind of thing on your average English terrace?

*Bing bong* “We politely ask fans to refrain from using coarse language to describe today’s match officials and hereby suggest that positive encouragement may be more welcome. If you have any complaints about today’s refereeing standards, please fill out a form and post it in the suggestion boxes provided. Thank you” *Bing bong*