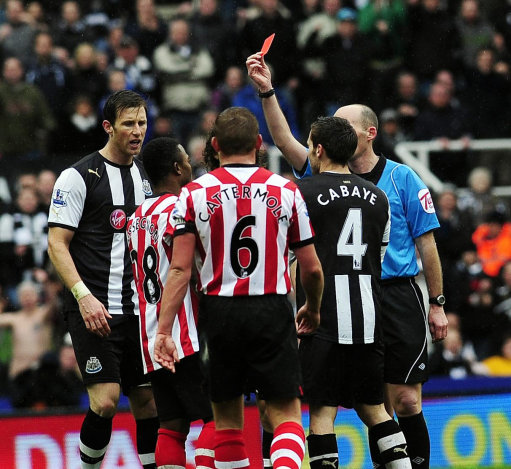 Sunderland pair Stephane Sessegnon and Lee Cattermole have been issued a cumulative total of seven game’s worth of suspensions following their red cards in (and after) yesterday’s ugly Tyne-Wear derby at the Sports Direct Northeast Regional HQ Stadium – a match, we’d just like to mention, that was refereed nigh-on impeccably by Mike Dean.

Sessegnon has been banned for three matches for elbowing Cheick Tiote in the chest/cheek while captain Cattermole has been handed a four-match ban for the dual violation of firstly having picked up his 10th booking of the season (after just 40 seconds of the game) before secondly being issued with a straight red after the final whistle for foul and abusive language directed at Dean and his assistants.

Newcastle manager Alan Pardew was critical of Cattermole directly after the game, accusing the Black Cats’ skipper of ‘setting the scene’ and blaming the slew of nasty challenges that followed on his 40-second booking for a headlong reckless challenge on Tiote.

Bear in mind that this is the very same Pardew who celebrated prematurely when Newcastle were awarded a penalty by screaming and fist-pumping in Martin O’Neill’s direction, whose goalkeeping coach Andy Woodman was dismissed at half-time after a tunnel spat with Sunderland fitness coach Jim Henry and who has also had to dismiss reports that members of his staff ‘visited’ the ref’s changing room after the game.

We’re not absolving anyone but, given his conduct yesterday, Pards’ little lecture on decorum rings a tad hollow.