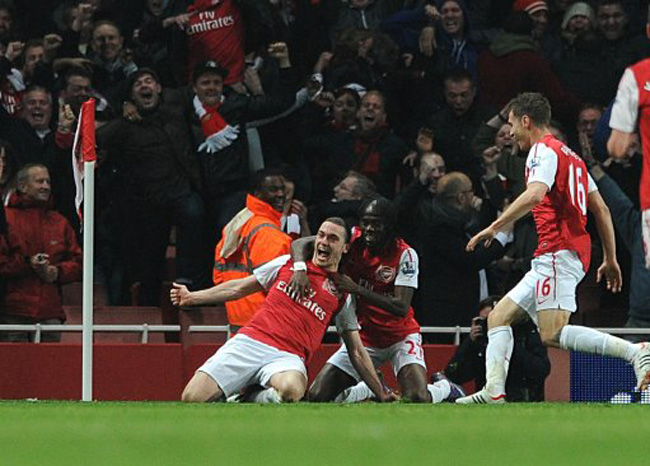 By snatching a last-gasp victory over Newcastle at the Emirates on Monday night, Arsenal became the first team in Premier League history to come from behind and win in four games in a row.

That win also puts them to within one point of third-placed Tottenham, bu the Gunners had to work hard for the three points against a well-drilled and disciplined Newcastle side.

The first two goals came within a bizarre spell in the 15th minute of the first-half, with Hatem Ben Arfa’s strike cancelled out almost immediately by Robin van Persie.

After the break it was all Arsenal, but a combination of bad luck and dismal finishing looked to have scuppered the home side’s chances of moving to within a point of Spurs. However, with seconds remaining, Thomas Vermaelen popped up to win the game for the Gunners.

Van Persie then goaded ‘keeper Tim Krul (who had been time wasting all through the second half) which lead to a bit of a fracas between the two Dutchmen at the end.

While Arsenal now have their eye on a top three finish, for Alan Pardew’s Magpies, the Champions League dream is starting to fade.