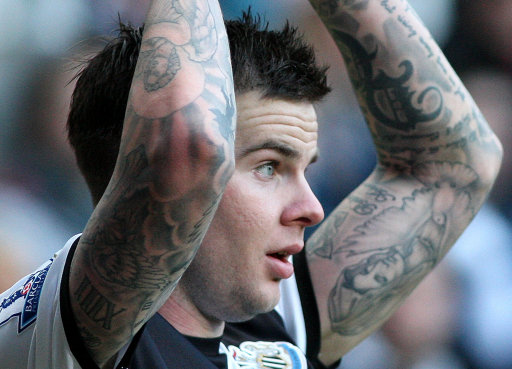 Muck with brass they are, nothing more than muck with brass. Or something. Anyway, tattooed midfielder Danny Guthrie, just released by Newcastle United, saw his dream wedding to  girlfriend Rebecca Middleman turn into a full on brawl, with guests reported to be throwing lobster thermidor at each other in some kind of expensive food-fight.

The scrap apparently began around 2am during the disco after the wedding, which took place at the swanky Allerton Castle, near Harrogate. The poor old bride was apparently punched in the face before the local police finally broke up the unfortunate melee.

The filth/bizzies/5.0. were then called again to the wedding only to be find that a number of the guests had been locked out of the hotel. According to the papers, a ‘source’ said:

“To say they behaved like peasants with money is an understatement. hey were obnoxious and disgusting. One could say it would be expected of a rough pub on a council estate, but then that’s probably unfair to council estates. It was more Big Fat Gypsy Wedding than our usual clientele.”

However, man of the moment Danny Guthrie then claimed that everyone was making a mountain out of a molehill. He Tweeted:

Still, whether it’s true or not, as an Irishman trying to come to terms with that thrashing by Croatia, I’m going to extract whatever joy I can get from the story.