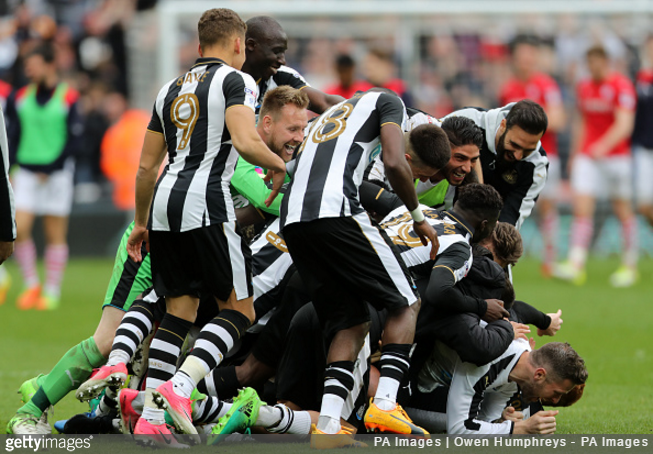 With the top spot and the final relegation berth still on the line going into the final match, the Championship certainly delivered in terms of last day jitters at both end of the table.

Newcastle were finally crowned champions of a league they were supposed to walk, hammering Barnsley 3-0 while fellow contenders Brighton succumbed to a late equaliser against Aston Villa to finish up in second.

Indeed, it was Jack Grealish who steered in an 89th minute goal to nix the Seagulls’ title hopes, with the Toon players erupting into delirious celebrations as the result from Villa Park filtered through…

The moment #NUFC heard they were champions… pic.twitter.com/lCbw8lHBPj

It wasn’t long before the champagne was being chucked about…

#nufc have done it pic.twitter.com/ZFuBARIGjN

Down at the bottom, there was despair for Blackburn as they became the first former Premier League champions to be demoted to League One.

Despite managing an emphatic 3-1 away win over Brentford, Rovers were sent down on goal difference after Nottingham Forest – with whom they’d began and ended the day level on points with – hustled to a 3-0 victory over Ipswich at the City Ground to keep themselves up by the skins of their collective teeth.

Unfortunately, this also meant that Harry Redknapp’s 19-day tenure at fellow relegation-flirters Birmingham ended in sun-soaked relief (and a 1-0 win over Bristol City).

Blackburn have only ever spent five seasons outside of the top two divisions in their entire 142-year history, the last time being 1979/80.

Until now that is, of course. A mighty fine job the Venkys are doing there.