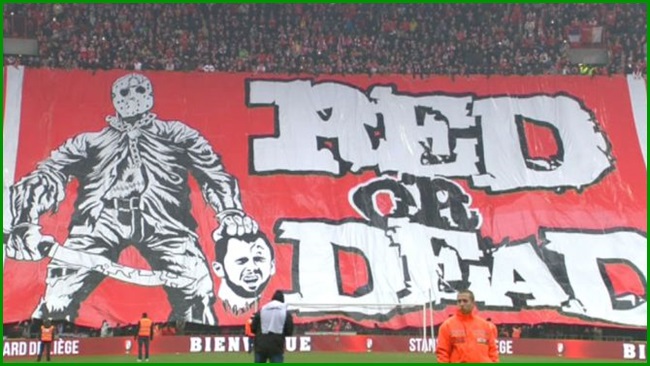 The Standard Liege fans responsible for the gruesome “Red or dead” banner depicting a decapitated Steven Defour unfurled during their weekend fixture could well be staring down the barrel of a five-year stadium ban.

Both Belgian government officials and the country’s football federation are seeking to bring action against each and every Liege fan involved in the production of the banner, which was displayed in the Stade Maurice Dufrasne during the club’s game against Anderlecht on Sunday.

Anderlecht midfielder Defour was eventually sent-off after reacting angrily to the relentless goading he received from the fans of his former club, having represented Liege for five year before leaving for Porto in 2011.

The tifo caused consternation in Belgium, with the interior ministry announcing that they are considering sanctions which could include a five-year stadium ban and a €5,000 (around £3,700) fine for each individual supporter involved.

“We’re working together with police to catch as many of the authors of this banner as possible,” a spokeswoman for the ministry said.

The foreign minister, Didier Reynders, took to Twitter immediately after the game to criticise the banner as  being “tasteless, stupid and unacceptable.”

Elsewhere, former Belgian prime minister (and noted Standard Liege fan) Yves Leterme, has also criticised the image on Twitter, writing: “Standard-Anderlecht has been ruined by a minority of supporters. I remain a supporter but feel ashamed by the banner.”