As you may or may not know, 128-year old Blue Square Premier side Darlington FC have had to sack their management team and playing staff and are teetering on the verge of extinction after going into administration for the third time in less than a decade – largely thanks to the utterly ridiculous £20-million, 25,000-seater ‘Darlington Arena’ stadium that former chairman and tax-dodger George Reynolds paid through the nose for a few years previous.

Who’d have thought that might not be the smartest idea for League Two (at the time) club, eh? Indeed, Darlo may not exist as an entity by Saturday’s game against Fleetwood if a takeover can’t be rushed through in the next few days.

Whereas it’s always a little gut-wrenching to see an established football club go to the wall for a fraction of the amount Carlos Tevez is fined for playing silly buggers every four months, the opening banner on the club’s official website is still a bit much… 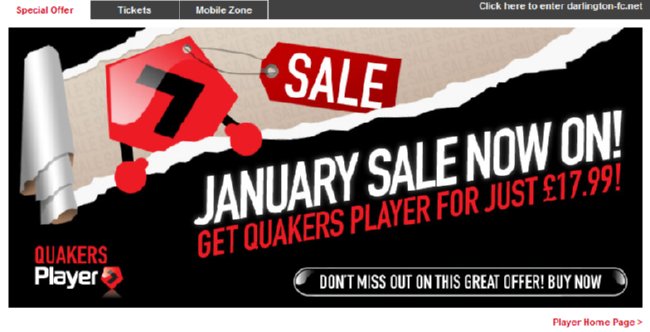 All joking aside, best of luck Darlo.