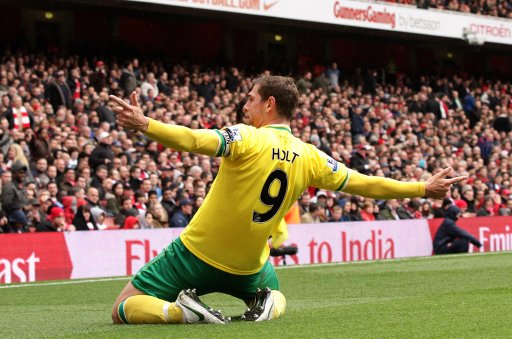 That lower-league journeyman turned Premier League goal-getter, Grant Holt, has signed a new three-year deal with Norwich City, only a month or two after doing the whole ‘loved my time here’ turn and handing in a transfer notice on the back of his admittedly impressive 15-goal debut season in the top tier.

However, with Paul Lambert gone to Aston Villa, the chunky hitman’s itchy feet to leave seems to have been soothed by the dulcet tones of new boss Chris Hughton, who said:

“I said when I first arrived that talking to Grant was a priority, as what he has achieved for Norwich and what he brings to the squad is there for all to see.”

“It’s great news that he has signed a new contract and I’m really looking forward to getting down to work with Grant and the rest of the players when we return to training next week.”

The fact may indeed be that no other clubs were that bothered about the 31-year-old Holt, but whatever the reasons, the striker is staying at Carrow Road. On the club’s official website, Holty said:

“I’m really pleased we’ve agreed things and that I’ve got a three-year deal. It gives me and my family a bit of security.”

“I do appreciate where the club were coming from in terms of the process we’ve gone through to get to this point. Now I’m just really keen to concentrate on getting back to work with the rest of the lads and concentrating on having a good pre-season and getting ready for the start of another season in the Premier League.”

Good luck to him. Although I doubt he’ll have quite as easy a time in the Premier League in 2012/13.