The annual Shrovetide Tuesday football match kicked off in Ashbourne, Derbyshire yesterday and, as is plainly visible from the photos below, the whole shebang reached levels of complete pandemonium very quickly as per usual. It’s all so absurdly ‘English’ that it positively hums with rural whimsy… 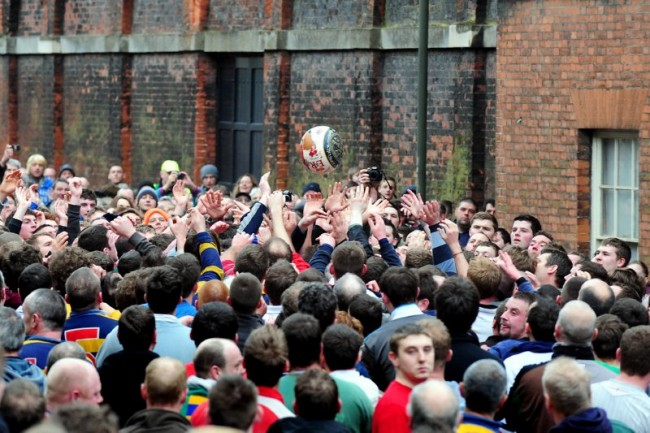 The game sees two vast teams (The Up’ards and The Down’ards, depending on which side of the river you were born on) compete to wrestle the huge, elaborately painted and cork-filled leather ball to one of the goals at either end of a pitch that is three miles long, two miles wide and has a river and a small Derbyshire town in the middle. It takes two days.

The shops are boarded up, cars are parked elsewhere and then the festivities begin, when the guest of honour tosses the ball from the special plinth in the middle of the town. Following the ‘turn out’, people generally get battered – both in a physical and alcoholic sense – until the game is over at 6pm on Ash Wednesday (today).

Jolly good fun, I should say.