We currently stand but 14,000 or so short minutes from the kick-off of Euro 2012 and, as the anticipation begins to ramp up a notch in the pit of our stomach, we began casting our memories back to the previous tournament in Austria and Switzerland back in 2008 (doesn’t it seem like an age ago now?) and take a look at a few of the stars thereof and their varied fates thereafter. 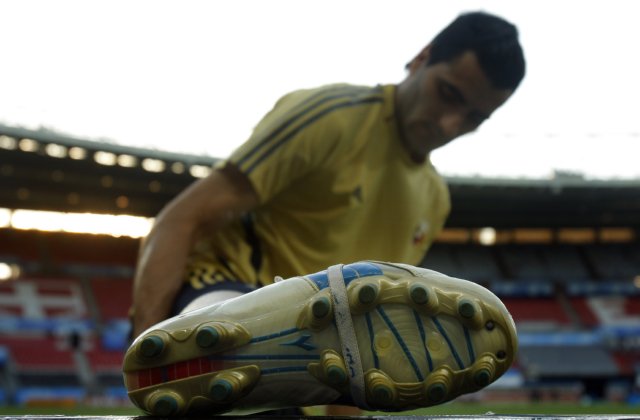 Dani Guiza and his luscious, deep-pile facial hair scored a whopping 27 goals for Real Mallorca the season before Euro 2008, going on to score Spain’s winning goal in the dying moments of their final group game Greece and duly looped home his second international goal in La Roja’s 3-0 semi-final victory over Russia. He also managed 15 minutes at the end of the final, replacing sole goalscorer Fernando Torres as Spain took their first European title in 40 years courtesy of a 1-0 victory over Germany.

Weeks after the tournament, Luis Aragones spirited him away to Istanbul in something of a surprise €14 million move after the veteran Spanish coach drew a close to his time with his national side and took over at Fenerbahce. After four goals in his first handful of games, Güiza duly went the next six months without scoring. The lustre quickly faded as his reputation as a ‘late bloomer’ rapidly wilted.

Aragones departed after just one season at Fenerbahce with the club’s feverishly impatient fans driven to distraction by Papa Espana’s insistence on playing possession-based football though, conversely, Güiza’s form began gradually picking up in his second season in Turkey – with the goals flowing a little more freely than once they had done.

However, isolated in a strange country after his wife left him holding the baby and returned to Spain alone, Güiza’s personal life began to suffer – with the bottom finally falling out hours before an international friendly against England in February of 2009. Lurid rumours were circulated in the Spanish press, accusing Güiza of sleeping with his ex-wife on the eve of the game and, while Vicente Del Bosque refused to jettison him from the squad there and then despite the Spanish media’s incensed braying, his standing slipped and his appearances began to dwindle.

That said, he was included in Spain’s 2009 Confederations Cup squad, coming off the bench to score a late brace in normal time (the second of which was really rather superb) in their third-place game against South Africa – which Spain eventually won 3-2 after extra-time…

Aged 31, he’s back in Spain and back with former club Getafe these days (whose president, Angel Torres, is a close ally of Güiza’s thanks to his goal-scoring feats during his first run with the Azulones in 2005), where he now spends most of his time providing ‘bench-based auxiliary support’ for his colleagues and also destroying his automobiles with poor fuel choices…

Thanks to the fantastic Sid Lowe for the transcription here:

As Getafe and Malaga players mingle before their La Liga game, the Malaga players ask Santi Cazorla if he’d ‘heard about Dani’s latest?’, “No,” Cazorla replies. So the Getafe players start to tell him about Dani Güiza’s recent trip to the petrol station with his new car when he only goes and fills it with diesel instead of petrol.

The players are giggling away like mad until Cazorla realises that there’s something not right about the story. “They have different sized nozzles,” he says, “How did you manage to fill it with the wrong petrol?”

To which Güiza replies: “From a distance.”

Next up: Andrey Arshavin