‘Twas the first legs of the Championship play-off semi-finals this weekend just gone, with dearly beloved near-neighbours Ipswich and Norwich playing out a tight 1-1 draw at Portman Road on Saturday afternoon.

With Jonny Howson putting Norwich ahead a few minutes before the break, Ipswich winger Paul Anderson (who’d only been on the pitch for 10 minutes) popped up to restore parity almost immediately deep into first-half injury time.

The goal, of course, sparked jubilant celebrations among the Ipswich fans watching at home, though Ross Morgan, 25, went just a little bit OTT – attempting to combine a leap into the air with a huge fist pump and ending up accidentally punching a hole in his living room ceiling.

As is the done thing these days, Morgan then sent a photo of the damage to Anderson on Twitter, admitting he’d “lost his head” after the winger stuck one past John Ruddy in the Canaries’ goal.

However, quite unexpectedly, Anderson subsequently replied, offering to pay for the ceiling to be fixed… 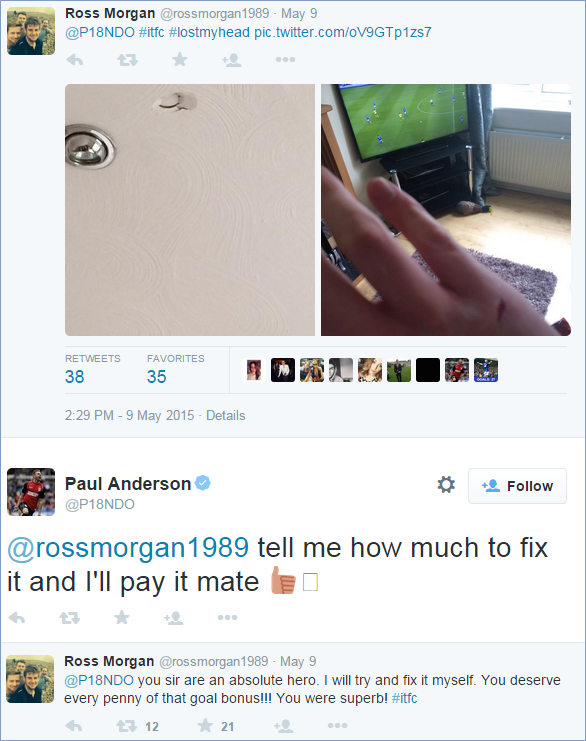 “I only sent it to him because I thought he might have thought it was funny,” Morgan told BBC Sport.

“Then he replied saying he’d pay for it. I was pretty shocked by that. It’s a great gesture from him.

“I’m 25 years old but footballers who play for your team are still your heroes. It was really good of him.”

“I wasn’t too happy because they’d [Norwich] just scored but then when Ando scored I just lost it.

“I went for a fist pump while jumping up at the same time. The next thing I knew I had gone through the ceiling.”

With the two sides set to meet again at Carrow Road next Saturday for the second leg, Morgan says he’s unsure how he’ll react if the Tractor Boys manage to get themselves to Wembley.

“l really don’t know what I would do. Maybe the TV would go through the window?”

Either way, Ando’s got you covered… 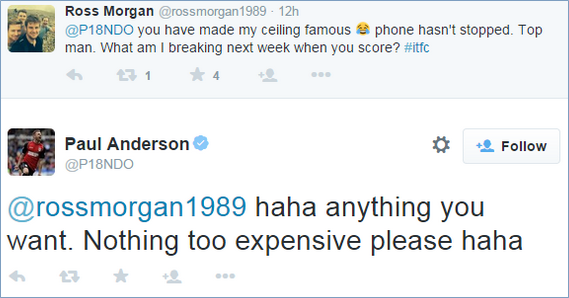