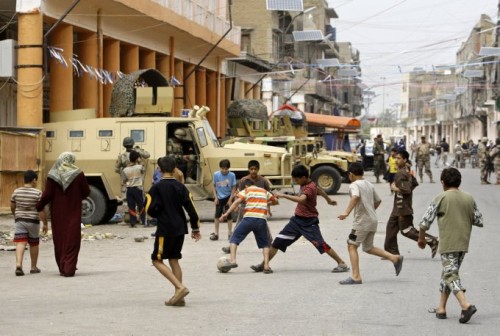 Iraqi children play soccer in Baghdad’s Fadhil district, Iraq, Tuesday, March 31, 2009. The U.S. military is seeking to reassure its Sunni allies that it would support them despite fears that the Shiite-led government plans a purge of their ranks after a weekend crackdown in Baghdad that saw the leader of a Sunni group arrested in central Baghdad’s Fadhil district Saturday and, after two days of sporadic fighting, his followers disarmed. (AP Photo/Khalid Mohammed)