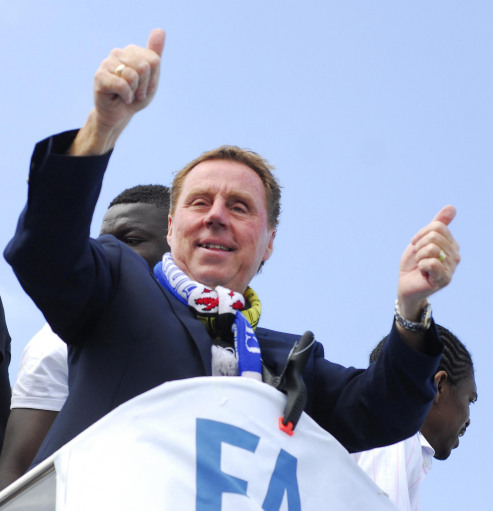 Harry Redknapp has vowed to do his utmost to help save Portsmouth from liquidation after it was announced yesterday that the stricken club have until August 10th to get their finances straightened up or face the very real  possibility of being pulped.

Redknapp, the man who put Tal Ben Haim on £36,000-a-week, has promised that he will call Nwankwo Kanu (yep, he’s still on the Pompey books) and try and coerce him into compromising with the club after the Nigerian lollygagger lodged a claim for £3 million in unpaid wages recently.

“I will be ringing Kanu today [Wednesday] to see if there is anything I can do. I signed him for Portsmouth on a one-year contract and Tony Adams told me: ‘You must be mad, he is finished’. Six years later, he is still there.

“In the case of Tal Ben Haim, if players have a contract and are owed money, you can see why they think they should get it. But if the club closes down they won’t get a penny. They need to think hard about that.

“Portsmouth has got to be saved. It’s a great club with great traditions. It would be a disaster if this club went out of business.

“It has great fans to the extent that, if you live in Portsmouth, you are a Portsmouth supporter. If you walk around in that town, you don’t see people wearing Manchester United or Arsenal shirts.

“It is soul-destroying to see them in this predicament, and there must be a group of people out there or someone who could take over the club so cheaply and save them.

“I would love to see someone do that. Surely it cannot happen that Portsmouth go out of business. If someone did come in, the club could be resurrected quickly. It wouldn’t take a lot to get it going again.

“I remember when Milan came in and bought the club all those years ago, they were looking to lock the gates then and go into administration – but he turned it all around and made it work.

“When he sold the club, it spiralled out of control. Balram Chainrai put a lot of money in, but he must think it is the worst investment he ever made in his life. But now it just needs some people who understand football and who can work with the players.”

Incidentally, when asked earlier in the week why he was refusing to budge while Pompey continue to circle the drain, Ben Haim replied: ‘My weekly wage is not as much as the administrator’s monthly fee.”

Something to bear in mind when pointing the finger of blame.

Anyway, back to Redknapp; y’know? The man offering to make a solitary phone call to help ease the burden of the shitted-up financial quagmire he bloody well facilitated in the first place…

Still, that FA Cup was priceless.