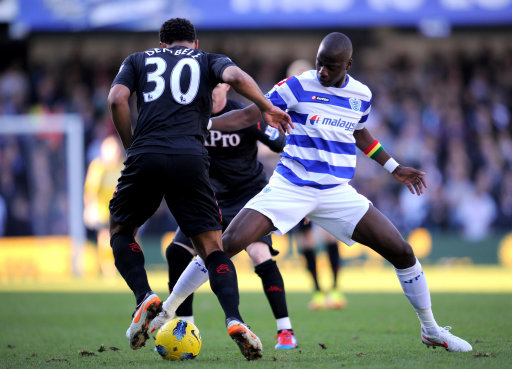 Earlier today we brought you a story about QPR man Samba Diakite (see the original story below). It had been widely reported that the Malian midfielder had returned home to France after suffering from depression.

However, now, the player has spoken to the media, denying the reports of depression.  Indeed he trained with the Hoops today. Here’s what he had to say (via Google translate so apols for anyone errors):

“Frankly, I do not understand the interest for people to start rumors like that.I’m fine, I have no problem, I was a bit tired these days, said the player. My club has allowed me to spend three days in Paris. But I am not depressed! My club is my job is my employer, I give them new every day.”

“All of a sudden when I got up this morning, opening the newspaper I learned that some said I was depressed. This is ridiculous and disappointing. I am currently in London and I just go to the training, so for me it is amazing.It saddens me because I received calls of concern from my family, everyone will wonder if it this morning. “

“Fortunately, I am a strong as it could have serious consequences for someone weak. So I wanted to reassure my friends and fans of QPR, I take the training on Monday with the group and all is well.”

So there. The player is fine. Which is good news all round. Who to believe, eh!

QPR’s tough-tackling Malian international, Samba Diakite, has returned home to France on a leave of absence (thought to be 10 days) after suffering from depression.

Although he started the Hoops’ first two league games of the new season, Diakite missed the game against Man City due to his illness.

It’s sad to hear of yet another footballer suffering from the ‘Black Dog’, and let’s hope that the player can overcome his illness. However, one positive aspect is the fact that the more people come out and publicly state that they are suffering from depression, then the less of a taboo depression becomes. This, in turn, should ultimately mean that more people will feel able to get help, which is only a good thing. And if footballers of all people, who work in what has been a traditionally macho environment, feel able to talk about mental illness, even better.