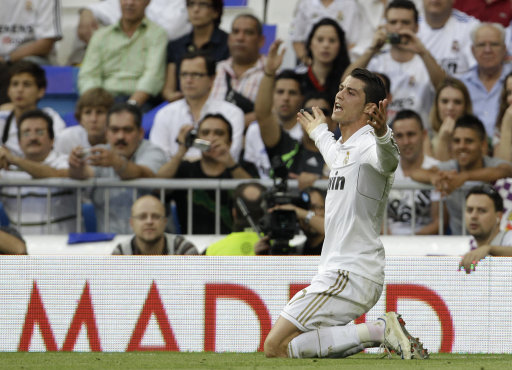 “Shit ball Mesut, I’ll be knocking a mark off for that”

It’s hard to argue that Cristiano Ronaldo has had a mind-scramblingly good season this year, scoring a gigajillion goals in Real Madrid’s La Liga title-winning campaign and pulling his side out of the mire on several occasions – and, boy does he know it.

In an interview with MARCA, Ronaldo, asked about his summary of Real’s 2011/12, doled out his end of season ‘marks out of ten’ and, ever the humble little lamb, duly gave himself the most glowing of reviews:

“On an individual level I give my season a 10, but collectively we are a 9 because we want to win more – the Champions League for example.”

Now, we’re not necessarily disagreeing with the creosoted superduperstar on that count – it’s not like any aspect of his incredible season and the various feats therein are deserving of any of teacher’s red ‘SEE ME’ biro – but rating yourself above your team? Come on kid, have a heart – Sami Khedira’s not that bad. Maybe we’re just overly used to hearing a standard bland ‘well, the lads done brilliant…’ response to that line of questioning, who knows?

Ronaldo also vowed that he planned to ‘much improve’ his game next term, though how one goes about improving on a perfect 10/10 is beyond us – that said, if anyone can, it’s probably going to be the Great Cristiano.