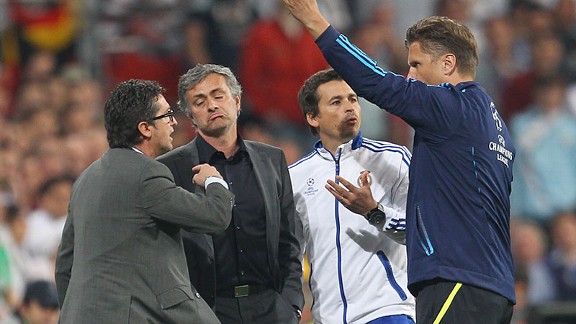 Just a quickie to let y’all know that UEFA have charged both Real Madrid and Barcelona for their conduct during last night’s abysmal Champions League semi-final at the Bernabeu – which should come as a surprise to literally no-one.

Real are in trouble over the ferrago surrounding Pepe’s red card and Jose Mourinho’s subsequent dismissal, as well as the behaviour of some sections of the Merengues’ support.

Meanwhile, UEFA have also seen fit to throw the book at Barcelona after reserve keeper Jose Pinto saw red during a scuffle between the two sets of players at half-time – meaning that all the diving, play-acting and snippy fouling throughout the game looks like it will go unpunished as per usual.

Both cases will be heard by UEFA’s Control and Disciplinary Body on 6th May.