During Real Madrid’s 4-0 routing of the Royal Arab Kingdom of Getafe last night, Cristiano Ronaldo scored a hat-trick (thus taking his league tally to a frankly astounding 36 goals in the process) though the game was perhaps more memorable for what happened during the 16th minute.

With the game still goalless, Ronaldo cleared a ball into touch which caught an unfortunate fan square in the boat race, leaving the poor guy with a bust conk and claret all over his handkerchief…

After the final whistle, a topless Ronaldo waded over the advertising boards to return to the scene of the crime, handing the supporter an apology in the shape of a photograph, a little man-hug action and a crisp new Real Madrid shirt. 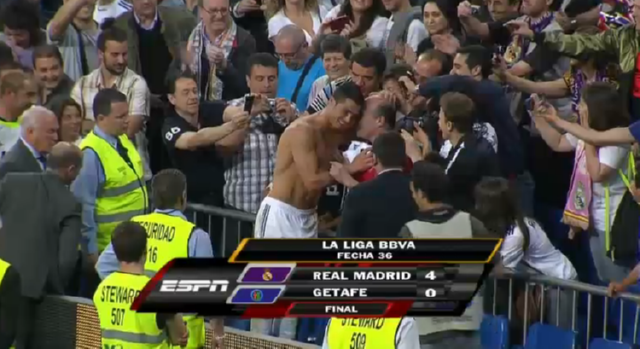 How sweet. That’s one to tell the grandkids.