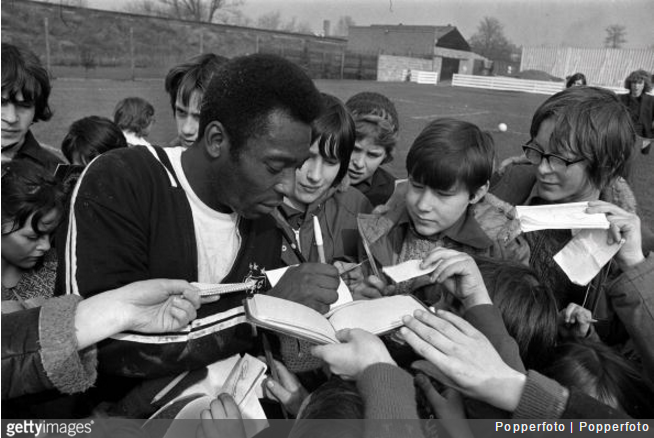 In 1973, Pele was the international football superstar. So imagine the excited fervour when his employers, Santos, embarked on a friendly tour of Britain.

In March that year, Santos played friendlies at Fulham’s Craven Cottage (Mr Nascimento can be seen signing autographs before that game, above) and Plymouth Argyle’s humble abode at Home Park.

It wasn’t the first time the club had appeared in Britain, as Pele’s stardom and the team’s success gave the club’s directors a chance to cash in with international tours that would generate more than Santos’ modest stadium could ever hope to.

Between May and July 1959, Santos played 22 matches in eight countries. By 1962, the travelling circus reached England, with Santos taking on Sheffield Wednesday at Hillsborough in front of 50,000 fans.

They returned in 1969 to play Stoke City, and again in 1972, when they took on Aston Villa and then Wednesday again in a game played at 2.30pm on a Wednesday afternoon because of energy restrictions caused by the ongoing miners’ strikes.

Pele’s final appearances on English soil came in those aforementioned games in March of 1973, but the Plymouth game almost didn’t happen.

A crowd of almost 40,000 turned up, prompting the ‘entrepreneurial’ Santos directors to ask for another £2,500 or their boys wouldn’t be taking to the pitch.

Plymouth had little choice but to cough up. They won 3-2, and treated their Brazilian guests to a lavish post-match reception.

The Gaurdian’s Hugh McIlvanney was not impressed, observing that “Santos turned the greatest player in the world into a footballing busker”.