Whereas these days players have to make do with a mere Jeroboam of champagne, there was a time, not so very long ago, when the recipient of the ‘Man of the Match’ award had the privilege of taking something actually useful home.

Those glorious, heady mid-years of Coca Cola’s sponsorship of the Scottish League Cup saw one lucky player finish the final with a glorious corporate-branded mountain bike to ride home on.

The first instance came in the 1995 final at Hampden, when Aberdeen’s Stephen Glass accepted the Coke bike (from Sandi Toksvig?) for his star performance in the Dons’ 2-0 win over Dundee… 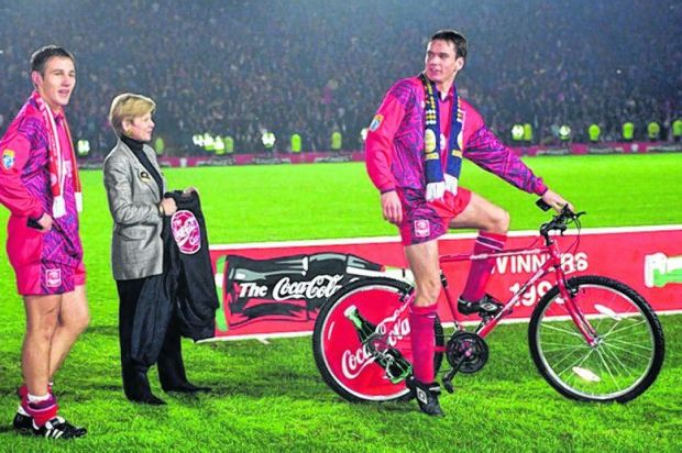 Photo: SNS (via The Herald)

Look at his little face. Beaming.

Such was the success of their stunt, Coke then repeated the feat the following season only this time it was a thoroughly knackered, dejected Neil McCann who was forced into feigning gratitude in the middle of the pitch after suffering a gutting 4-3 defeat against Rangers… 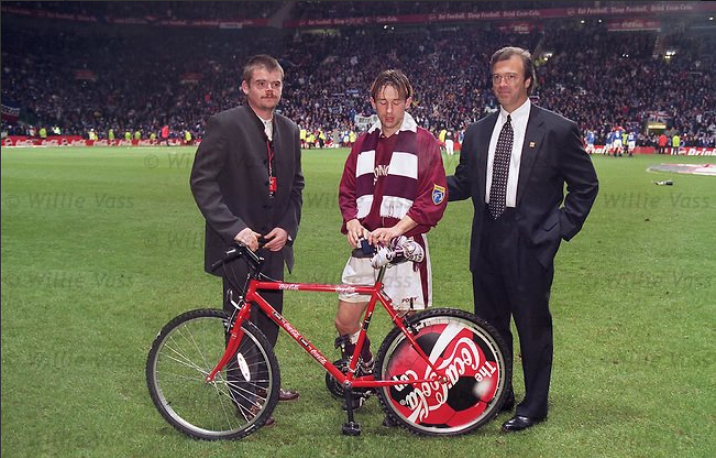 Photo: Willie Vass (via Kick Back)

Semi-interestingly, the “iconic” bike foisted upon Glass in 1996 was raffled off for charity in 2014.

Reminiscing about the bike at the time, Glass revealed to the Aberdeen Voice that it had been held onto by his father-in-law, who kept it in “pristine condition” at his house in Montrose.

He’s been round the block on it maybe two or three times and it’s been cleaned regularly so it’s looking good.

It’s an important piece of the club’s history and I’m sure interest in the raffle will be significant.

That it was, with the Dons’ eventually raising around £25,000 for Aberdeen’s youth development scheme by selling 5,000 tickets at £5 a pop.

As for the bike’s whereabouts now, Pies can only assume it’s on exhibition in a museum somewhere as an artefact of supreme cultural importance.