The history of Northern Ireland is, for lack of a better expression, fucking horrible. As a young man who grew up at the tail end of the Troubles I was merely seven miles removed from the worst atrocity of the conflict, Omagh.

The country has changed since then. Peace had been embraced a year previous in the Good Friday Agreement and life has gone on with brief glimpses of our horrible past brought up in memorials and anniversaries. However, one aspect of the conflict remains; the terrible state of our football, not only in quality but in organisation and support. When it was mooted that the Northern Ireland national team stopped using the dilapidated stadium at Windsor Park it was an excercise in futility. A new site could not be agreed and millions were spent in plans that were never used, so Northern Ireland continue to play in a stadium officially described as a ‘fire risk’ because a significant section of the largest stand is made of wood. I think that bears repeating: the national team currently play in a stadium which is still wooden and is deemed a fire risk. A UEFA delegate called it ‘Third World’.

The history of football in Northern Ireland isn’t actually all that terrible. As a nation we have produced footballers as talented as – first and foremost – George Best but also Martin O’Neill, Pat Jennings and Norman Whiteside, whose career was brutally cut short. Glentoran FC were one of the first clubs from the UK and Northern Ireland to win an international club tournament in winning the inaugural – and also the last – Vienna Cup, albeit back in 1914. Also, as one of the first Football Associations the IFA has one of the five votes on the International Football Association Board (the body that determines the Laws of the Game). In the post-war era Northern Ireland have reached the World Cup three times, making the quarter-finals once and finally, since the Troubles ended, we have beaten both Spain and England at Windsor Park. 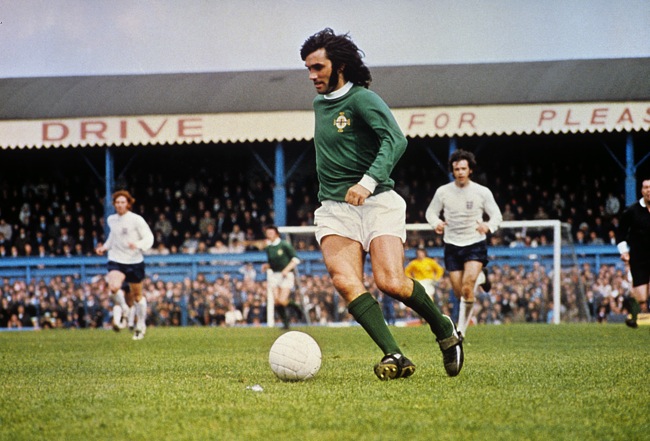 Though the international team is not reflective of the national game, Northern Irish teams have been whipping boys in UEFA competitions for as long as I can remember and our local teams have not produced a top-flight player in that time either. In contrast, from the Republic of Ireland in my lifetime Roy Keane has moved from Cobh Ramblers to Nottingham Forest, Seamus Coleman has gone from patrolling the flanks in Sligo to a Merseyside Derby in just two years, and (less widely known) an uncapped Irish striker recently signed for a team in the Portuguese Liga (Padraig Amond for Pacos Ferreira, if you’re curious.)

However, the actual quality of football and footballers in Northern Ireland is the paint that covers the cracks. Rather nice paint when you watch Matty Burrows’ wonder goal, though look at the state of the stadium he performed it in. Something much more sinister, much more reprehensable lies just beneath the surface. I say this of course with the absolute authority of a person who doesn’t go to local games. Does that undermine my position? No, because there is a reason why I can’t go to my local games (not that I would anyway) – it’s because I don’t feel comfortable and I don’t feel safe.

Sectarianism is rife in Northern Irish sport, football being predominantly a Unionist sport. Clubs with any form of history tend to come from the industrialised areas of the country, which were historically largely Protestant, whilst the rural areas – largely Nationalist – played and still play Gaelic sports, and therefore have very few teams in the IFA Premiership. Currently only one team comes from the south west – Dungannon Swifts – whilst in Antrim there are currently seven Premier League teams, five of which are from Belfast, a modest city roughly the size of Sunderland.

This has led to a rather exclusive support for the local game. Whilst Gaelic games continue to sell out stadia for local, schools and inter-county games, the IFA have been dealing with declining attendance numbers for several years. Married to this is the threat of hooliganism. After that final in Heysel, hooliganism has been thankfully little more than a footnote in the English game, with flashes of unrest being exactly that: brief glimpses of the trouble which once cursed the game. Across the Irish Sea, it’s a different story.

To quote a recent edition of the Londonderry Sentinel (January 3rd 2011):

“The stoning of a Linfield supporters’ bus in Londonderry, sectarian abuse hurled at Derry City stewards, and a slashing incident at the Irish Cup final, which resulted in Greysteel killer Stephen Irwin going back to jail, were amongst 28 reported incidents at sports stadiums in Northern Ireland over the last six years.”

That’s right, a ‘slashing’ involving a man who was convicted of the ‘Greysteel Massacre’ and the stoning of buses leaving a match after a Setanta Cup (an All Ireland tournament) match. 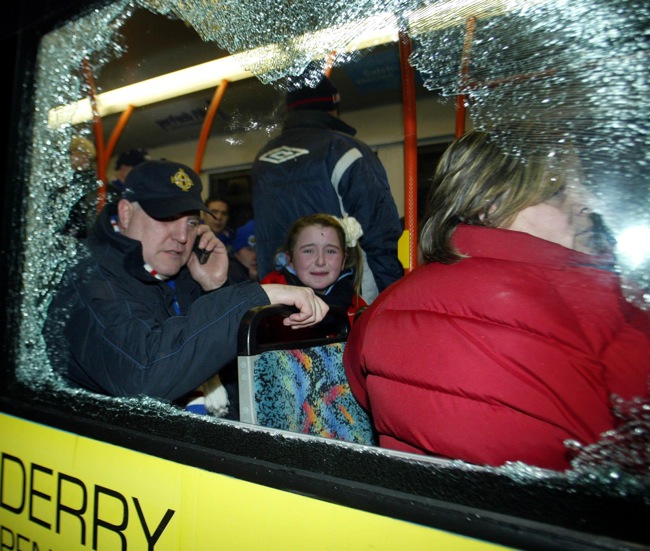 February 2005: Buses carrying Linfield supporters were attacked by stone throwers as they left the Bradywell in Londonderry, after a ‘friendly’ between Derry City and Linfield

All of this is not to say that football is not the predominant sport in Northern Ireland. Quite the opposite, however the majority of support is for teams on the mainland with most young supporters choosing not only a team in the English Premier League but also one of the Old Firm. That is a history well documented, however when you add the political and paramilitary history of Northern Ireland you can get the toxic atmosphere where anyone might think it’s appropriate to send bullets to professionals who have the temerity to be of a certain religion or play for a certain club.

It is not only the recent evil involving McCourt, McGinn and Lennon. Fernando Ricksen indicated that he had received bullets in the post during his time in Glasgow. It is as Lennon put it himself, stupid. It is also reductive, pointless and only serves to highlight the failures of each set of ‘fans’ who send them. Football is tribal at the best of times but religious discrimination appears to be the last bastion of the football hooligan in the UK and Northern Ireland.

It is vile but that is the nature of the discourse in Northern Irish football. It is not with hope or pride but trepidation that I look forward to the Carling Nations Cup match with the Republic of Ireland due to take place in May 2011 in Dublin. I fear that the game will become a rallying point for the very worst elements. Indeed, one must only look at the problems when a group of Polish supporters came to Belfast – for a fight – and multiply that by history, sectarianism and a hot summer evening.

The author asked for his identity to be protected

Editor’s note: In the original article the author claimed that Loughgall FC had never – to his knowledge – fielded a Catholic player. We fully accept that this is not the case and are happy to set the record straight. Apologies.

In terms of other comments, the author “stands by” his opinions.