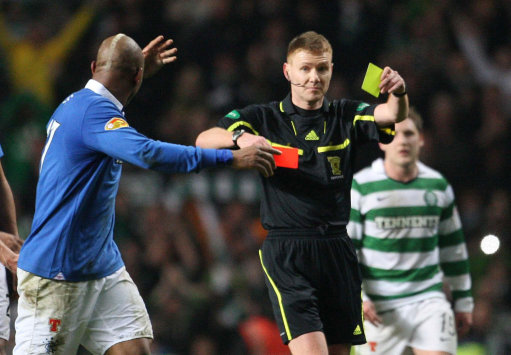 Even by Old Firm standards, last night’s Scottish Cup fifth-round replay clash between Celtic and Rangers was a tumultuous affair, with no less than three Gers players seeing red as the game quickly descended into disarray.

Rangers midfielder Steven Whittaker was the first man to have referee Calum Murray’s red card flashed in front of his eyes, after picking up a second booking for a 35th-minute foul on Celtic’s Emilio Izaguirre.

The two sets of players then clashed in the tunnel as they left the field at half-time, before Madjid Bougherra was dismissed in second-half injury time for incurring a second caution just before the final whistle.

However, sh*t-stirrer par excellence El-Hadji Diouf and his white stripe of pure rage still found time to be brandished a red card after the game, receiving a second yellow for dissent after already becoming embroiled in a touchline ruckus between Celtic manager Neil Lennon and Rangers assistant Ally McCoist earlier in the game – an altercation that also flared up again after the game had finished.

Here’s a snippet of Sky Sports’ post-game analysis, which includes footage of the aforementioned incidents…

As always with these things, the Youtube police will be on this pretty sharpish so enjoy it while it lasts.

Speaking of the powers that be, the behaviour of the players, managers and fans at Celtic Park  has since been branded ‘shameful and disgraceful’ by the Scottish Police Federation after Strathclyde Police were forced to make 34 arrests inside the stadium for a variety of sectarian, racial and public disorder offences.