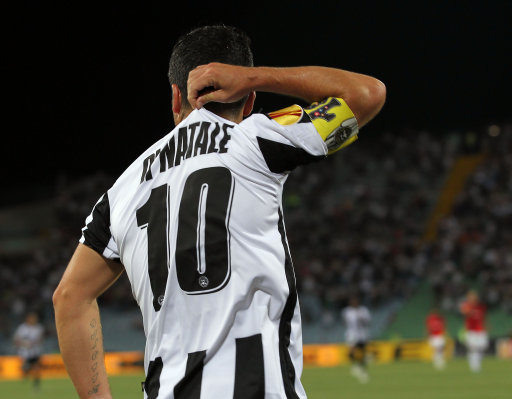 Immense stuff from Udinese hero Antonio Di Natale, who has vowed to take guardianship and provide both financial and emotional support to the sister of former teammate Piermario Morosini – the Zebrette midfielder on loan at Livorno midfielder who died at the tragically young age of 25 after collapsing on the pitch in Serie B this weekend.

Being disabled, the player’s sister relied heavily on Morosini for financial support following the death of both their parents during their childhood – her being his only surviving immediate family member after their brother (who was also disabled) committed suicide.

Di Natale has assured that both he and Udinese’s affiliated charity will now look after her following Piermario’s untimely death.

“We know the situation of his sister and we as a team, the club, and Udinese for Life (the club’s charity) have decided to help her because she is in real need.

“I will ensure she is not abandoned. She has already lost everybody. It is essential to stay by the side of Piermario’s sister for her entire life. She needs us and we want to help, both for her and for Mario.

“When I saw the scene on the TV it was immediately clear that it was something serious. It was a very bad moment. He was an exceptional lad, so full of life.

“Despite all the problems he had, he was always at the disposal of the team and every day he gave us all strength.”

What a fantastic gesture, both from Di Natale and Udinese as a collective. Incredibly commendable.