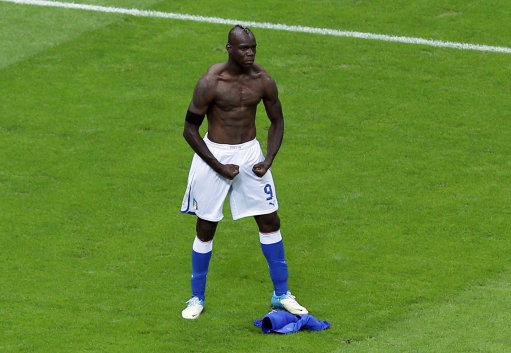 Whisper it but it seems highly possible that Mario Balotelli may have commissioned a statue of himself in his Euro 2012 ‘power flex’ pose which, it would appear, is to be finally immortalised in bronze for the sake of all mankind.

An Italian sculptor is claiming that he has received the order from Balotelli, though the pair are yet to meet.

“I received the commission, but have never actually met Balotelli, so I am working from photographs.

“I presented various sketches, but Mario wanted to be immortalised in the pose after the goal: muscles in evidence and an expression to challenge the opponents.

“I imagined him as an athlete from ancient times. The statue will be between the classic and pop style, in platinum and coloured bronze with the eyes made of precious stones.”

Balotelli’s power flex has already been artistically captured using the medium of Subbuteo, but a full-size bronze statue takes it that bit further.

Who knows what Balo’s going to do with it? Donate it as a gift it to the people of Brescia by unveiling it in the town square? Have it put in place at the summit of Everest, forever glaring down at the rest of the human race? Have it placed alongside his downstairs toilet as a vaingloriously ornate bog roll holder?

The possibilities are endless.