Yep. Some dozy pillock at the Pala K go-karting complex on the outskirts of Milan decided it’d be a good idea to let Mario Balotelli rag his brand-new, £200,000, gleaming white Ferrari 450 (apparently bought to ease the pain of splitting up with girlfriend Fanny Neguesha) around their tiny, twisty track… 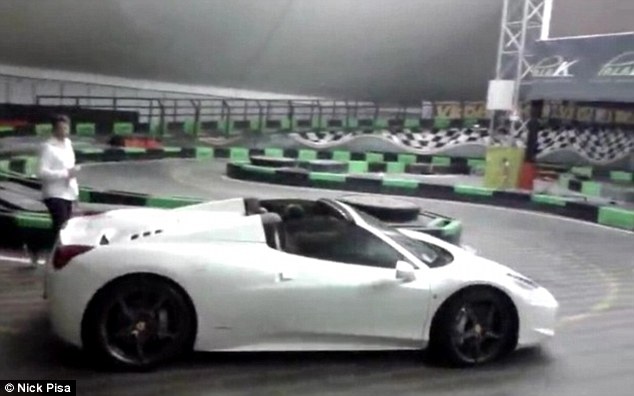 Pala K owner Joe Ghiringhelli is quoted in the Daily Mail as saying:

“Mario loves coming here but he’s not allowed to race the karts because of his AC Milan contract – they are worried he may injure himself.

“Mario is a regular visitor here and would come over even when he was playing in England – he loves the karts and driving although he said he could never get used to driving in England because over there they drive on the other side of the road.

“We let him take his new Ferrari out on the track and he was roaring around laughing and having fun. Fanny was no where to be seen but as we all know Mario won’t be too worried about her, he will be with someone new before you know it.”

In short, it’s just you’re average “man splits up with girlfriend, spends shed-loads on a new Ferrari, takes it to go-kart track, drives around pretending to be a giant all day to get over his heartbreak” tale.